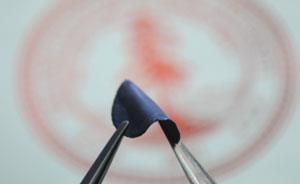 The low mass and huge electropositivity of lithium allow lithium ion batteries to store far more energy per unit mass than alternatives like nickel–cadmium, so they are the batteries of choice for mobile phones and laptop computers. But lithium's electropositivity makes it highly reactive, and, to keep it safe, manufacturers often have to restrict the amount of lithium in the electrodes, limiting the batteries' capacities. Now, researchers in the US have developed a coating that could allow next generation batteries to have pure lithium anodes.

A lithium-ion battery is charged by driving lithium cations on to the anode, where they are stored as neutral atoms until the battery is discharged. The ideal anode would be lithium metal, but this can react with liquid electrolytes, damaging the battery and giving out dangerous amounts of heat. It also expands hugely and non-uniformly during charging, forming large growths called dendrites that can short-circuit the battery and cause explosions. As a result, manufacturers use lithium intercalation compounds, most commonly LiC6.

Multiple research groups have designed coatings to protect a metallic lithium anode from the electrolyte while still allowing lithium ions through, but these usually crack as the electrode expands. This exposes the bare lithium underneath, which quickly reacts with the electrolyte and forms pits, making the electrolyte unstable and causing the battery to wear out quickly. 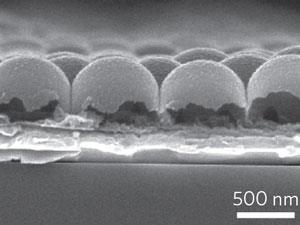 Materials scientist Yi Cui and colleagues at Stanford University deposited amorphous carbon on polystyrene nanospheres before heating it to dissolve the polystyrene. This left an interconnected layer of carbon nanospheres containing pores that would allow lithium ions through but keep out the electrolyte. The researchers tested a lithium anode covered by their membrane in a working electrochemical cell. At a power output of 0.5mA/cm2, they found 98.5% of the electrode survived 150 cycles, while 50% of an uncoated electrode was destroyed after only 100 cycles.

Jiguang Zhang, a lithium battery expert at the US Pacific Northwest National Laboratory, says: ‘I think the principle is very important.’ Nevertheless, he cautions that the present production method is not scalable to industry, and the power output is 10 times too low for real lithium batteries. ‘From a laboratory scale proof of concept to a real battery application, I think they have some work to do,’ he says. Cui suggests it may be possible to mass produce the coatings using printing technology, and says the team have now achieved stable operation at 2–3mA/cm2 and are currently working on increasing this.