A team of Chinese researchers has discovered a new way to synthesise hollow carbon nanospheres and used them to make a potassium–ion battery (KIB), a cheaper alternative to a lithium–ion one.

Hollow carbon nanospheres show great promise in energy storage, catalysis and biomedicine. While classic approaches to preparing hollow carbon structures require hard templates and hazardous chemicals, such as sodium hydroxide or hydrofluoric acid, this new approach is a highly efficient one-step process, explains An-Min Cao, one of the lead authors and a researcher at the Chinese Academy of Sciences. Cao’s team discovered that polymeric resins can be used to grow nanospheres in a controlled manner. They can then be carbonised in the oven at 1200℃, and transformed into the final hollow carbon product. 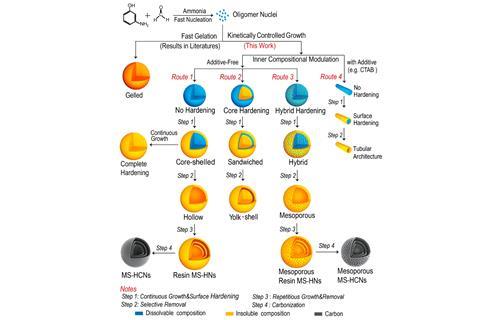 The Chinese team prepared nanospheres with both mesoporous and plain surfaces using different synthetic routes. They can also differentiate single and multilayer hollow carbon nanospheres – they can reveal their inner structure with transmission electron microscopy. ‘The electron beam penetrates through the particles, and the image shows a contrast in light and shade that corresponds to the hollow space and the shells,’ explains Cao.

Cao and his team then incorporated these nanospheres as the high capacity anode in a potassium-ion battery. According to Cao, hollow structured samples should mitigate the problems that large potassium cations cause in the electrode materials. ‘Due to the abundant resources, KIBs are considered as a promising alternative for lithium–ion,’ explains Cao. ‘They can theoretically provide a higher voltage window.’

Karin Kleiner, a battery researcher at the Diamond Light Source in Oxford, notes that ‘potassium based systems […] may not reach the consumer market soon’. Nevertheless, she says that new cathode materials like Cao’s nanospheres ‘might lead to the necessary increase in the energy density of the system providing a big advantage over conventional lithium–ion batteries […] and therefore offer a huge potential for research.’ Kleiner also explains how ‘amorphous carbon is usually added to every electrode to enhance its kinetics. If it can be shown that nanospheres [are] an advantage […] there is big potential for real world applications’.

The Chinese team found that nanospheres with three shells were best at stabilising potassium cations and improving the capacity of the batteries. However, ‘despite the high stability and excellent capacity, our samples showed a relatively-low Coulombic efficiency, which is a big problem for its practical use’, says Cao. ‘We are currently working on this issue and, hopefully, it can be resolved soon.’