Iodine revealed to be killer species that destroys tin-based perovskites 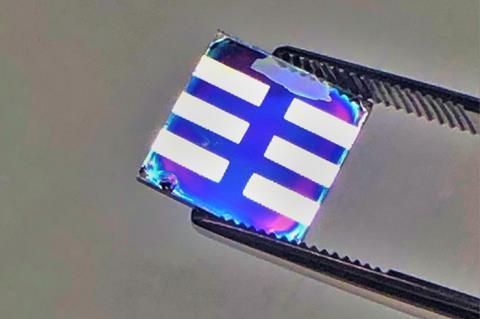 The poor stability of tin-based perovskites under ambient conditions has limited the progress of this promising type of solar cell. Now, a study by researchers at Imperial College London and the University of Bath has shed light on the degradation mechanisms that affect these devices – oxygen and moisture induce the formation of iodine, an aggressive species that further poisons the perovskites. Moreover, researchers identified materials that prevent oxidation and could inspire new solar cell designs that are greener and more stable.1

Solar cells based on lead perovskites have exceeded expectations in terms of efficiency. However, chemists are moving away from this metal due to its toxicity. The element that lives above lead in the periodic table – tin – has arisen as a promising alternative, showcasing the highest power conversion efficiencies among lead-free alternatives. Moreover, studies show that, although tin is toxic, it has lower bioavailability. If there was a leak, tin is likely to oxidise into insoluble products, and the biological impact would be minimal.2

‘This tendency to easily oxidise is a double-edged sword, though,’ explains first author Luis Lanzetta from Imperial College London. ‘Stability is the main problem of tin-based perovskites, mostly due to the oxidation reactions that take place when the materials are exposed to air and moisture.’ The mechanism of these degradation processes was only partly known – now researchers have combined x-ray diffraction, spectroscopy and computational calculations to fill in the gaps.

They soon found a suspect – iodine. ‘This element is usually found as a counter-ion in tin perovskites,’ Lanzetta explains. Oxygen and water degrade tin(II) into inactive tin(IV) salts, but they’re also responsible for the formation of unwanted iodine compounds, like hydrogen iodide and molecular iodine. ‘We discovered that this species further triggers the oxidation of tin(II) into tin(IV) salts, feeding a vicious cycle that keeps decomposing the perovskite,’ he says. 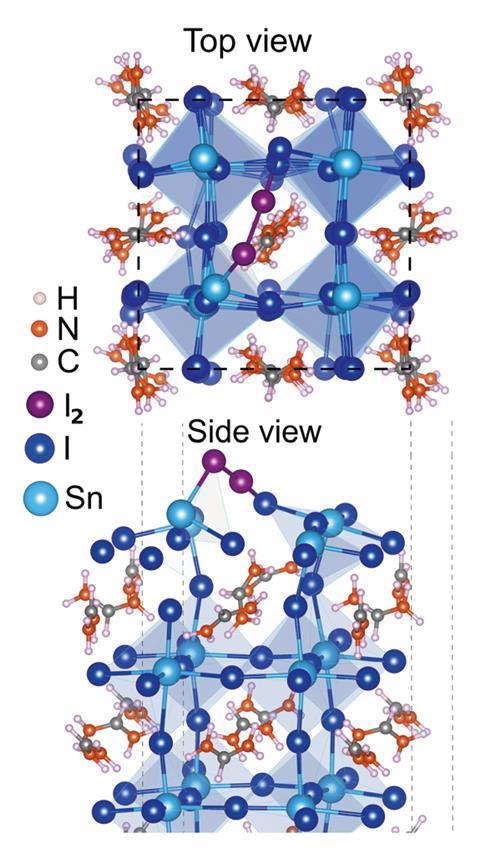 Top and side views of the structural arrangement of an adsorbed I2 molecule (purple) on the surface of FASnI3 (from DFT calculations). Molecular iodine and iodide species were found to degrade the performance of tin perovskite devices at minute concentrations

‘Stabilising tin(II) in perovskites remains a challenge, due to the high stability of tin(IV) species,’ explains Maria Antonietta Loi, an expert in tin-based perovskites at the University of Groningen, the Netherlands. ‘This paper clarifies the role of iodine in this process, and provides a very clear pathway to explain the degradation reactions – this information is very valuable towards future designs.’

Besides unravelling the dark side of iodine, researchers also noticed the importance of choosing the right material to support the perovskite. ‘Perovskite solar cells have a sandwich-like structure,’ explains Saif Haque, from Imperial College London, who co-led the study. ‘We’ve got conducting glass, a hole transporter, the perovskite, an electron transporter and then a metallic contact.’ The team discovered that the hole transporter – a material that carries positive charges – is key to preventing degradation.

They compared several commonly used hole transporters – nickel oxide, copper thiocyanate and PEDOT:PPS, a polymer mixture – and observed that the polymers excelled at preserving tin from oxidation. ‘This suggests that further exploring the effects of some ingredients in the sandwich could lead to more efficient and stable tin perovskite solar cells,’ adds Haque. ‘Everybody uses PEDOT:PPS as a hole transport material, it works really well with tin solar cells,’ explains Loi. ‘This research highlights the importance of the interface layers, and maybe others will start looking into better materials for both hole and electron transport,’ she adds.

Loi believes the true breakthrough is unravelling the harmful properties of iodine. ‘When cells are manufactured, the perovskite is normally heated, which releases halogens into the environment that potentially contaminate the device,’ she says. The team discovered that even 350ppm of iodine triggered degradation.

‘Tin perovskites are increasingly popular,’ says Haque. ‘We hope these new discoveries will boost their recognition even further, and more people will start adopting them as a green, efficient alternative to lead.’