New family of glasses made from molten hybrid organic–inorganic perovskite 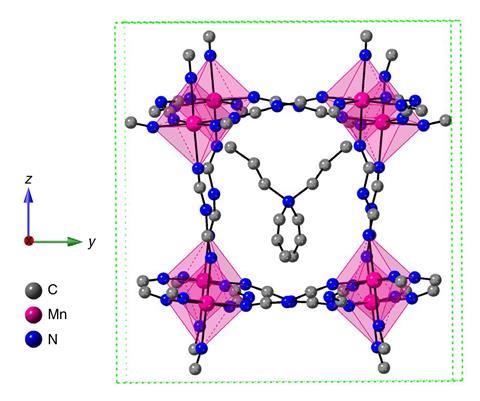 By melting and quenching hybrid organic–inorganic perovskite compounds, scientists have created a new family of glasses that could find uses in the energy sector.

Crystalline materials have attracted much attention in hybrid organic–inorganic perovskite studies, so an international team of researchers shifted to non-crystalline ones. Previous work reported that amorphous perovskites exist, but the new work goes further in characterising them.

The team made three hybrid organic–inorganic perovskite compounds based on tetrapropylammonium with manganese(II), iron(II) and cobalt(II) and melted them. According to author François-Xavier Coudert at the CNRS in France, they had to tune the temperature to aim for a very narrow temperature window, around 20 degrees on average, depending on each metal used – hot enough to liquefy the samples, but not so hot that it decomposes them. The team measured the exact heat coming in and out of the glasses to learn their properties, describing each one thoroughly. ‘We’re melting a novel class of materials and accessing a novel family of glasses,’ Coudert says. ‘I’ve probably never seen materials so well characterised with so many techniques and so much information. It is fascinating to see all of these methods together.’

‘A chemist making something is very good, but knowing and understanding what you’ve made, is even more exciting,’ adds co-author Frédéric Blanc, a researcher at the University of Liverpool. ‘This is often the key challenge for amorphous materials.’

Comparison of physical properties of melt-quenched glasses with various materials

With growing interest from the energy industry in using perovskites to harness solar energy, the team compared the new glasses’s physical properties against other materials such as silica. The new glasses have extremely low thermal conductivity and moderate electrical conductivity at room temperature, meaning they are suitable for thermoelectric applications. ‘We are highly hopeful toward its industrial applications in waste heat energy recovery systems, power generation systems, renewable and clean energy, among others,’ says first author Bikash Shaw, a researcher at the University of Cambridge, UK. ‘We could potentially try to substitute current thermoelectric materials, which contain heavy and environmentally unsuitable elements, with our recently discovered glasses,’ he adds.

Kavassery Narayan, a physicist at the Jawaharlal Nehru Centre for Advanced Scientific Research, who isn’t involved in the study, praised the work. ‘The fact that they can use a metal–oxide framework based on hybrid perovskite and then make it amorphous by melting and rapidly cooling is an important development. The glassy nature opens up many applications in electrical conductivity and thermal conductivity.’

Coudert adds that it would be interesting to use this detailed knowledge of the glasses’s structure to play around with its components. ‘Since [the glasses] are organic–inorganic hybrids, we could tune the different components. We could change properties from material to material by using this “Lego principle”, where we change the bricks and obtain different properties. I don’t think this is about having a material that beats everything else right now, but it’s more like allowing us to see a future where things can be controlled, tuned and improved,’ he says.