The first strain of yeast that can synthesise painkilling opioids from scratch using a sugar feedstock has been engineered by scientists in the US. Yields are currently very low, however, with tonnes of yeast required to produce a single dose of painkiller. But the team behind the work believe that the yeast can be substantially improved, and could help to drive down the cost of producing painkillers and develop new opioids.

Christina Smolke and colleagues at Stanford University used more than 20 enzymes from plants, mammals, bacteria and yeast to piece together the benzylisoquinoline alkaloid (BIA) synthesis pathway in a single genetically engineered strain of the baker’s yeast Saccharomyces cerevisiae. ‘If we can engineer a microorganism like yeast to make these compounds, it could be used to stabilise the supply and reduce the cost of making these medicines,’ says Smolke. 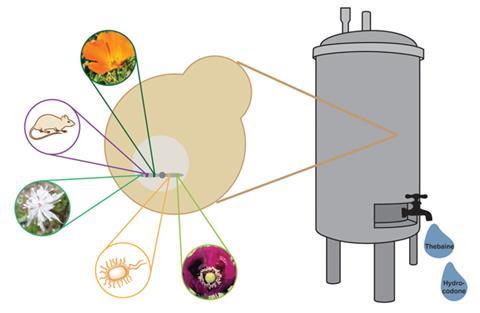 As the pathway is so long and complex, the approach taken has been to work on it ‘in pieces’, Smolke explains. Since her group started working on it a decade ago, most of the pieces have been engineered. In 2008, Smolke’s group reported a yeast strain that could produce reticuline – an important intermediate – from norlaudosoline, a commercially available chemical. Other sections of the pathway, converting reticuline to thebaine and other opioids have also been achieved. And in a major breakthrough earlier this year a team led by John Dueber of the University of California, Berkeley, US, completed the early part of the pathway by incorporating a tyrosine hydroxylase enzyme into a yeast strain, allowing it to produce reticuline from glucose. ‘[In May] we predicted that assembling the complete pathway was just around the corner,’ says Vincent Martin, a bioengineer from Concordia University in Canada who worked with Dueber.

In order to get the pathway to go from a sugar to the opioid thebaine, Smolke’s team had to put all the pieces together and incorporate 21 enzyme-controlled steps into a single strain. ‘There are a lot of challenges associated with getting the enzymes to be functional – getting them properly folded and processed and localised,’ says Smolke. After successfully producing thebaine, they were able to add another two enzymes that converted it to hydrocodone, another opioid painkiller.

The group has already demonstrated that thebaine can be converted to drugs including morphine in other modified strains, so in theory it would be possible to extend the pathway still further, although this isn’t currently feasible with such small yields.

‘What needs to be done now … is to increase the yield from the strain using standard metabolic engineering tools and fermentation tricks,’ Martin says. Current yields are extremely low, because of the large number of steps. Using this particular strain it would take thousands of litres of fermentation broth to produce a single 5mg dose of hydrocodone.

But Smolke is hopeful that it may only take another couple of years to optimise the process enough to make it commercially viable. ‘A lot of knowledge has been collected over the past few years about doing industrial fermentations with yeast to make high value compounds,’ she says.

And while the current low yields are a major hurdle to commercialisation, they should also calm any immediate concerns about ‘home-brew heroin’, Smolke adds. ‘There’s no risk of that with these yeast strains. You could get more of these compounds from poppy seeds.’ The idea should be revisited as yields get better, she adds, as it is easy to do experiments to establish whether it is possible to get meaningful production in a non-optimal ‘home-brew’ environment.

In the long term, the hope for this technology is that it can be applied to other biosynthetic pathways to make new medicines.

‘I think this is an important milestone in terms of the complexity of a biosynthetic pathway we can put into an organism like yeast and actually get it to work,’ says Smolke. ‘It means we could begin to do this with compounds beyond the opioids.’