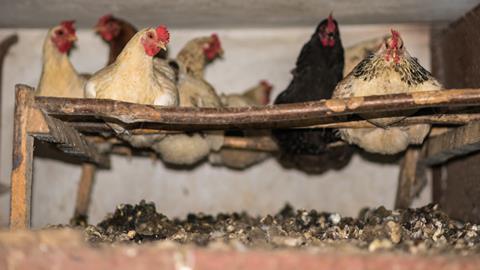 ‘It seems that whatever “crap” we put into graphene, electrocatalysis increases.’ That’s according to Martin Pumera, University of Chemistry and Technology, Prague, Czech Republic, and colleagues, whose experiments prove their point.1

We have beautiful data for rabbit poo-doped graphene

But the invention is not intended for serious use. Instead, it’s a final attempt to draw attention to how meaningless studies are that try to improve graphene’s electrocatalytic efficiency by adding other elements. They stress that there are up to two million combinations for any four of the 84 reasonably stable elements from the periodic table. They question the value of such studies. ‘Stop this never-ending doping madness,’ says Pumera.

The Pumera group has taken its crap research very seriously. Here scanning electron microscope images of graphene oxide can seen prepared two different ways – with (C and D) and without (A and B) chicken droppings. The top slides are at 3000x magnification and the bottom at 40,000x

The work continues the Pumera group’s efforts, together with Lu Wang at the University of Toronto, Canada, to make graphene electrocatalysis research more rigorous. Since 2012, the researchers have published several similar papers showing issues with graphene electrocatalysts thought to be metal-free. Their studies find that metal impurities are present, and are the actual catalyst for hydrogen evolution from water. Pumera says that some people noticed, but most ignored these findings.

‘It is easier to publish great metal-free or doped graphene in top journals than to publish against hundreds of groups,’ Pumera explains. ‘For several years we were alone, showing that the observed effects stem from something else, against powerful groups. It was dangerous and I always said “Our papers have to be 200% bulletproof”.’ Tiring of progressively ‘taking down’ bad graphene electrocatalysis papers, he took more drastic measures.

To clear up the mess in graphene electrocatalysis doping, his team ‘super-doped graphene with chicken droppings’, Pumera says. ‘I really wrote the paper mostly for myself to make the final graphene-doping point. The Twitter response, with over 1000 likes and 4000 reads within first 24 hours, and 40,000 downloads in five days from publication, took me by surprise. All reactions are positive, so finally, people heard us.’

Mix Chicken poo with #graphene and you get superdoped #electrocatalyst. See our paper: Will Any Crap We Put into Graphene Increase Its Electrocatalytic Effect? Will humanity start [trade]war over highly valuable chicken guano? https://t.co/RA7nBU8P86 @acsnano @VSCHT @CEITEC_Brno

Xile Hu from the Swiss Federal Institute of Technology in Lausanne, was one of those who commented on the paper on Twitter. He praises the team’s ‘substantial efforts’ to show ‘the meaninglessness of random co-doping of graphenes for electrocatalysis’. ‘And they did it in Hollywood style!’ Hu tells Chemistry World. ‘The problem they highlighted was the lack of insight or practical value of such research. This reminds me of the phrase “garbage in, garbage out”.’

‘I really like this paper because it is both ingenious and funny,’ comments Franziska Emmerling from the German Federal Office for Materials Research and Testing (BAM) in Berlin. ‘I’m not aware of a comparable publication. The paper highlights an important, general principle: we should invest time planning further studies, and consider whether they really make sense and add value. This is an important consideration across all areas of science, and has been beautifully demonstrated in this clever, detailed study.’

This is not the first time that graphene research has involved faeces. In 2011, James Tour’s team at Rice University in Houston, US, made graphene from dog poo.2 However, Pumera’s studies were more inspired by Richard Compton at the University of Oxford, who previously critically investigated electrocatalysis using carbon nanotubes. ‘I just loved these papers,’ Pumera says.

Pumera now says that this is ‘the final point of my decade with graphene’. ‘We have beautiful data for rabbit poo-doped graphene, but it would take away all the fun if I published more than one paper,’ he adds. ‘My goal was to inspire people to be more critical in general and I hope I at least in part succeeded.’