The perfect black body exists only in textbooks, absorbing as it does, theoretically, all energy hitting its surface and then subsequently emitting that energy without loss. Researchers in Saudi Arabia have taken a leaf out of that textbook to create the blackest material ever made. Their disordered nanostructured material exhibits almost ideal black body absorption of 98–99% across the visible and infrared region of the electromagnetic spectrum. Moreover, neither the angle of incidence nor the light’s polarisation affects absorption.

Andrea Fratalocchi of the King Abdullah University of Science and Technology (KAUST) and colleagues suggest that their broadband light absorbing material could open up new approaches to energy-harvesting devices and optical interconnects. The novel material is made of a nanorod attached to a nanosphere. This composite nanomaterial can, on average, absorb 26% more incident light than carbon nanotubes, which were previously considered the blackest known material and were being investigated by Nasa for use on satellites.

The team has now exploited this absorption efficiency to build a new light source. When they irradiate the material with nanosecond bursts of about 100mW from a pumped dye optical amplifier the subsequent emission of that radiation is essentially monochromatic, the emitted light being restricted to a bandwidth of 5nm.

Moreover, this effect is possible without the need to use any kind of resonance. Instead, the phenomenon arises purely because of the dynamics of light condensation in which all absorbed electromagnetic energy spontaneously generates single-colour energy pulses, the team reports.

While earlier attempts to create black body materials have relied on organising carbon nanotubes into thin layers that can undergo resonance, this comes with the distinct disadvantage of making them receptive to irradiation at only a specific angle. The KAUST team avoids this limitation by taking inspiration from nature. 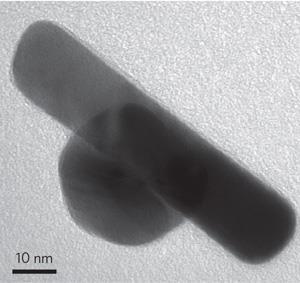 The researchers were aware of natural materials that are ultra-white, such as the scales on the Cyphochilus beetle, native to south-east Asia. The whiteness is due to the microscopic photonic crystal structure of the scales. With their nanomaterial the team has inverted this ultra-white property using the concept of chaotic energy harvesting to allow them to design a material that would be as black, if not blacker, than those materials are white. Instead of the nanomaterial being ordered as they might be in a photonic crystal, the surface structure is disordered and offers incident light a random network of ‘pores’ made of infinitely long, metallic waveguides. Nevertheless, the use of an optical dye allows the material to re-emit incident light as if it were a resonant structure. The team points out that the engineered dark nanoparticles are versatile, can be easily dispersed in liquids or deposited on solid thin-film structures for a range of applications. The same particles might also lead scientists down new avenues of fundamental research into Bose–Einstein condensation of light and how that could relate to nanoplasmonics.

‘Now, we are employing these nanoparticles to ideate new devices for water desalination and the production of solar fuels,’ Fratalocchi tells Chemistry World. ‘Preliminary experiments showed remarkable efficiency results already and we are now in the process of optimisation of a prototype.’

‘Natural systems are a great inspiration for scientists,’ says Silvia Vignolini of the University of Cambridge, UK. ‘In this paper, Huang et al demonstrate how the Cyphochilus beetle has taught us how a continuous interconnected network of scattering element allows us to achieve angular and wavelength  independent response.’ She adds: ‘This general concept can be applied for improving white, as well as black … although nature is still ahead of us regarding optimisation.’