Boron shows its negative side

A molecule that hosts a negatively-charged boron atom could prove to be an exciting addition to the chemist’s toolbox, according to researchers who have isolated the anion as its lithium salt.

Lithium can partner many of boron’s neighbours in the periodic table, such as nitrogen in lithium amide, and carbon in methyllithium. But there have been no direct observations of the equivalent boryllithium compounds containing a negative boron atom.

Now, Makoto Yamashita and colleagues at the University of Tokyo, Japan, have managed to make crystals of a reactive boryllithium molecule.

’Because similar reactive species such as alkyllithiums have been isolated, we believed that the isolation of boryllithium was possible,’ Yamashita told Chemistry World. 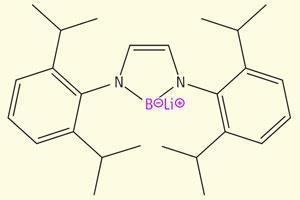 The boron anion is stabilised by two adjacent nitrogen atoms, and prepared by reacting lithium with a boron-bromide precursor. X-ray crystallography and boron-11 nuclear magnetic resonance measurements of the compound match theoretical predictions of what a true boron anion should look like.

The team found that the anion could react as a base, stripping hydrogen atoms from water. But it was also an effective nucleophile, easily attaching itself to the relatively positive carbon atoms within butyl chloride and benzaldehyde.

Although there are a few metal-catalysed reactions where boron appears to behave as a nucleophile, the active boron compounds have never been isolated, commented Todd Marder at the University of Durham, UK.

’The work opens the door to new pathways in boron chemistry that will have a substantial impact on both organic and inorganic synthesis,’ said Todd. ’[It’s] a very exciting time for boron chemistry’. As with any unusual new tool, it remains to be seen how synthetic chemists use it, but it is likely to provide more efficient routes to a variety of different chemical structures.

The team now hopes to increase the scale of their synthesis, and link the boron anion with other metals such as magnesium or zinc.