The environmental disaster that has followed the collapse of a dam at a Brazilian mine on 5 November has caused unprecedented damage in that country and will have irreversible negative effects on human health and the environment, according to experts. 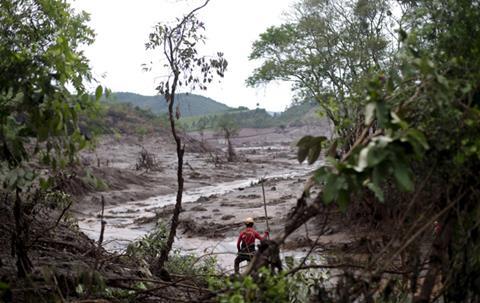 The accident buried the small historic town of Bento Rodrigues, a subdistrict of Mariana, under mud. At least 11 people have died and more than 600 were displaced. In addition, the water supply of more than 250,000 people in the area was interrupted as it was contaminated with heavy metals.

Tonnes of mud made up of iron ore waste and silica, originally estimated to be about 25,000 Olympic swimming pools in volume, have spread over 800km and reached one of the largest Brazilian rivers, the Rio Doce. The contaminated mud, in which the Minas Gerais Institute of Water Managment has found toxic substances like mercury, arsenic, chromium and manganese at levels exceeding drinking water limits, has reached the coast of the state of Espírito Santo. It could potentially impact the wider marine ecosystem.

The risks go beyond the particular chemical elements found in this mud. Dam water was also contaminated with harmful bacteria.

Many are blaming the disaster on Samarco, which is the Brazilian mining company in charge of the dams. The company is a joint venture between the mining giants Vale of Brazil and BHP Billiton of Australia.

Although it was initially announced that two had dams collapsed in the mine, representatives of the National Department of Mining Production surveyed that area by air and have confirmed that only the Fundão dam collapsed. They warned, however, that Samarco’s Santarém dam has been ‘overran’ and remains at risk of collapse, as does the company’s Germano dam.

‘As there was never an environmental incident of this magnitude, it is impossible to calculate the real impact right now,’ says Klemens Laschefski, a researcher at the Federal University of Minas Gerais.

‘The changes in the flow of the river in respect to the currents and the new geochemical conditions in the sediments will bring profound ecosystem changes, which will also influence the species, including with the possibility of disappearance of endemic species,’ Laschefski warns. In addition, he says water plants in the area are endangered because the mud that now covers them will eventually harden like cement, due to its high iron content.

Aloysio da Silva Ferrão Filho, a researcher at the Oswaldo Cruz Foundation, agrees that the situation is dire. ‘The entire ecosystem is under threat and the impacts can even reach the marine food chain, possibly even the Abrolhos coral reefs, which are quite sensitive to sedimentation of inorganic material,’ he tells Chemistry World.

Ferrão says these effects can last for decades. He says the high concentrations of heavy metals in the water samples from the Rio Doce, could lead to the bioaccumulation of metals in the food chain, and possibly reach toxic levels in some organisms.

‘The biodiversity of the river is completely lost,’ Ferrão states. ‘Several species, including endemic ones must be extinct.’ Although some recovery must be expected through restocking from other tributaries, he says it is impossible to estimate how long such reclamation would take.

Several investigations are underway to determine the causes of the disaster, including one by federal and state prosecutors, and others by the Brazilian Institute for the Environment and an independent group of researchers.

Samarco states that several small seismic tremors that occurred in the area could have caused the dam damage, but some experts point to negligence on the part of the company and the government bodies responsible for overseeing the mine.

For example, Laschefski states that the risks of rupture of the Fundão dam, and the lack of a contingency plan for such a scenario, were well documented back in 2013. Nevertheless, he says that Samarco has not taken measures to address such threats, and actually increased its waste production.

On 11 November, the CEOs of Vale and BHP Billiton jointly pledged to support Samarco in creating an emergency fund to rebuild damaged infrastructure and provide relief for those affected by the disaster.

In fact, Samarco representatives signed an agreement with state and federal prosecutors on 16 November to pay at least $250 million (£164 million) to cover emergency measures.

On 13 November, a judge in Mariana granted an injunction freezing $75 million in Samarco’s bank account to provide for reparations to local victims of the accident. The previous day, Brazilian President Dilma Rousseff had confirmed a $62.5 million fine for the mining company, announcing that other fines could be forthcoming.