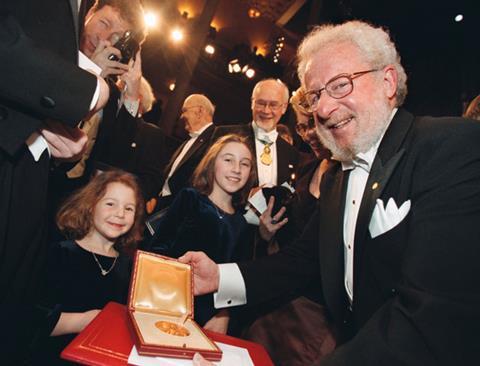 Heeger, along with Alan MacDiarmid and Hideki Shirakawa, received the Nobel prize in 2000 for discovering a new class of polymers that had electronic and optical properties like metals and semiconductors; polymers quite unlike all other known materials. Heeger was excited in the early days: ‘We knew we were onto something that was new and important. We could see many many possibilities for directions to go both scientifically and in terms of the eventual technology. And that evolution of science into technology has occurred.’

While plastics were important, Heeger describes the landscape prior to their discovery: ‘There was no interest or no utility in plastics for electronic purposes; plastics were used to make things, you know, chairs and windows, polypropylene windows, plastic bags.’ However, their findings changed perspectives about plastics and launched research into myriad applications like functional inks for printing electronic surfaces. Heeger and his colleagues were venturing into a new area.

Heeger is no stranger to change. He embraces risk. When polymers and electrochemistry piqued his interest, he took on new areas without hesitation: ‘Each of these things was outside my area of core knowledge and therefore going into it was a significant risk and living with that risk is an interesting part of my life.’ Along with risk, he identifies discovery and creativity as ‘three components that are really involved and important in the development of new science.’

Past reflections and future visions

Conducting polymers have come a long way considering they didn’t even exist until the discovery was published in 1977.1 Heeger says it is currently ‘one of the top three fields of activity in condensed matter science,’ based on publication and citation metrics. He reflects on subsequent landmarks since his discovery, ‘I think … the polymer LED [light emitting diode] was one and that’s being commercialised these days for cell phones and eventually TV and the other one is the use of these materials in anti-statics and that’s a big area right now … it’s growing into a significant technology.’ He adds, ‘[the] unique electrochemistry of these polymers … continues to be exciting and growing and…the last point I wanted to make is the discovery and development of transistors.’ 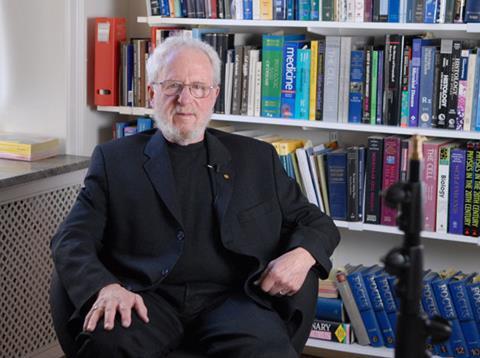 Heeger’s group is tackling transistors that he refers to as ‘the most important circuits of modern electronics.’ While transistors are not new, he’s bringing performance to another level. ‘We’re studying polymer field-effect transistors with very high mobility, mobilities approaching 100cm2/Vs which gives me optimism that they will really be used in circuits for a wide variety of circuit applications,’ he explains.

Plastic solar cells, made from semiconductor polymers, are another exciting research front in Heeger’s lab and the research community: ‘[It] grew in to a very big field over the years with thousands of publication every year and efficiencies have continually improved.’ He’s positive about progress after a recent breakthrough ‘expanded the class of materials greatly so I expect to see significant improvement in the efficiencies.’

In the broader context, Heeger believes plastic electronics have a key role to play in sustainable energy: ‘I think that the plastic solar cell as it’s being developed will have a significant market. It won’t be just one solution to the energy problem.’ Sometimes polymer solar cells are uniquely situated to solve multiple problems at once. Heeger describes one practical example: ‘We can make polymer solar cells that are semi-transparent so they can be put in windows…I don’t know of any other technology for photovoltaics that can be made in transparent forms…which is a potentially huge project. You’re cutting down your need for air conditioning but at the same time generating electricity and lowering your bill.’

Although Heeger and the community are contributing to sustainable energy solutions, things are far from being resolved in plastic electronics. Heeger points to solar cells as a big challenge in the field, ‘I’m very optimistic…the recent developments are very positive but a lot of work is needed.’

Beyond being a research professor, Heeger is an active entrepreneur, co-founding startups based on conducting polymers across multiple commercial sectors including displays, microfluidics, and targeted drug therapy. To manage his busy schedule, Heeger says, ‘the important thing is to focus [your effort on] one thing at a time … I’ve so far been able to do that and most days life is enjoyable.’

Ed. We wish Alan Heeger a happy 80th birthday this 22 January as he skis the slopes, and all the best for the man whose innovations continue to spark new research in plastic electronics.