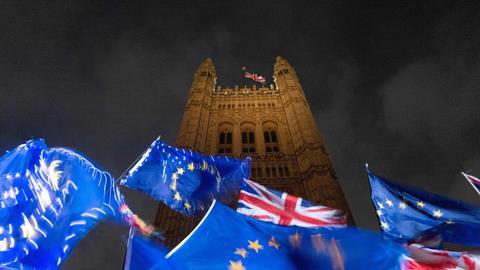 Since the referendum in June 2016, the UK government has been working to secure the country’s departure from the EU. Over three years later, the process continues. But the uncertainty that it has wrought is taking its toll on the science community.

In order to avoid a ‘no deal’ departure, which would sever links with the bloc, the government and the EU must agree a ‘withdrawal agreement’. This will govern the UK’s exit until a formal future relationship can be established, together with a ‘political declaration’ outlining that relationship.

Prime minister Theresa May’s proposed deal was rejected by parliament earlier this year and the Brexit deadline was first extended from 29 March 2019 to 30 June and then 31 October. May’s successor Boris Johnson introduced his own withdrawal agreement bill, which the government later withdrew. A general election was called for 12 December and the EU agreed to a revised departure date of 31 January 2020.

The EU is a significant funder of academic research. The UK receives nearly £1 billion a year from the Horizon 2020 programme, which accounts for more than 10% of UK universities’ research income. But funding has fallen by more than a quarter since the EU referendum, as has the number of projects in which UK researchers are participating. And chemistry is no exception.

Brexit is causing considerable anxiety amongst our university colleagues

‘For UK chemistry departments, the funding that they received from EU sources rose steadily from 2013–14 to a peak in 2015–16, but has declined significantly since then,’ says Tanya Sheridan, policy and evidence manager at the Royal Society of Chemistry. ‘This means UK chemistry received over £10 million less from EU sources in 2017–18 than in 2015–16.’

The uncertainty surrounding Brexit is also harming international collaboration. There is evidence that UK researchers are being dropped from multinational bids. At least one European funder has instructed UK grant-holders to transfer administration of their grants to non-UK partners. And the number of scientists coming to the UK under key EU mobility schemes has fallen by 35%.

‘We have seen a dramatic drop in the number of leading researchers who want to come to the UK,’ said Venki Ramakrishnan, president of the Royal Society. ‘People do not want to gamble with their careers, when they have no sense of whether the UK will be willing and able to maintain its global scientific leadership.’

The lack of certainty surrounding Brexit has also led EU researchers to leave the UK. Between 2015–16 and 2016–17, the number of EU academics leaving elite Russell Group universities rose by 11%, with the sciences – notably chemistry – being hit particularly hard. And some universities have experienced difficulty recruiting PhD students and postdoctoral researchers.

Although the government has promised ‘settled status’ to EU nationals currently living in the UK, the application process has been plagued by technical problems. And the rights associated with settled status, which ought to be very similar to those EU citizens living in the UK currently benefit from, have yet to be enshrined in law, leaving overseas researchers fearing for their jobs – and, indeed, their right to remain in the UK.

‘Brexit is causing considerable anxiety amongst our university colleagues,’ says Emma Raven, head of the school of chemistry at the University of Bristol. ‘They are of course worried about access to EU funds and the effects of that on the future science landscape and on our ability to compete at the highest level internationally. But the Brexit debate brings wider issues – it makes our EU colleagues feel unwelcome in our science community, it is potentially off-putting to prospective students, and it creates uncertainty and nervousness around decision making.’

A new deal for Brexit

Following the rejection by parliament of Theresa May’s original Brexit deal, Boris Johnson has negotiated a new withdrawal agreement with the EU but has not yet received parliamentary approval for his plans. Under this deal, the UK will leave the EU’s single market and customs union, although there will be a ‘transition period’ until December 2020.

The withdrawal agreement ties the UK into the EU’s budgetary arrangements until the end of December 2020, which obviously isn’t very far away in terms of science funding

While the government has yet to provide its own assessment of the economic impact of the proposed deal, academic thinktank the UK in a Changing Europe, which is funded by the Economic and Social Research Council, says it would cause long-term damage to the UK economy. Its projections suggest the current withdrawal agreement could cut UK GDP per capita 10 years after Brexit by between 2.3% and 7%, compared with staying in the EU. This is better than a no deal scenario, but it nevertheless represents a hit to the public finances of somewhere between £16 billion and £49 billion a year.

And if the government fails to agree a longer-term trade deal with the EU, the spectre of a more damaging no deal Brexit at the end of the transition period emerges.

We are ‘living in the shadow of Brexit’, says Peter Coveney, professor of physical chemistry at University College London. In March, he took up a concurrent post as professor of applied high performance computing at the University of Amsterdam to protect his own research and funding portfolio from the impact of Brexit. He cites the example of the EU’s €1 billion (£840 million) EuroHPC project to create a world-class European supercomputing infrastructure for research and innovation. Because of Brexit, the UK has been relegated to observer status on the project and has had to go it alone in developing the supercomputing capability demanded by researchers. ‘The position we’re currently staring at is laughable,’ says Coveney.

Under Johnson’s proposed Brexit deal, UK researchers will continue to be eligible to participate in Horizon 2020 and other EU funding programmes until the end of the transition period in December 2020, when the existing funding framework comes to an end anyway.

Whether the UK will be able to participate in the EU’s successor research funding programme, Horizon Europe, which comes into effect in January 2021, is uncertain. Science minister Chris Skidmore has told parliament’s science and technology committee that he expects to negotiate entry to the programme from the outset. However, given the scale of the negotiations that lie ahead association to the scheme is unlikely to be a high priority and far from certain.

‘The withdrawal agreement ties the UK into the EU’s budgetary arrangements until the end of December 2020, which obviously isn’t very far away in terms of science funding,’ says Tamara Hervey, Jean Monnet professor of European Union law at the University of Sheffield and research leader for UK in a Changing Europe. ‘After that, there’s no continuity. That would be covered by any future UK–EU relationship. And of course we don’t have anything other than the political declaration on that.’

In the absence of an agreement on the UK’s participation in Horizon Europe, scientists may still be able to apply for funding through schemes that are open to ‘third country’ participation. Funding programmes not open to third countries, such as the European Research Council and parts of the Marie Skłodowska-Curie fellowship programme, will be off-limits to UK-based researchers.

The government’s Brexit deal will bring to an end freedom of movement, restricting the ability of UK nationals to work across the EU and of EU citizens to work in the UK. The government is at pains to emphasise that EU citizens currently in the UK will be eligible to apply for permanent residency after five years. But they may lose this entitlement if they subsequently leave the country for an extended period.

New migrants will be subject to the UK’s existing immigration rules for non-EU citizens. But these are set to be overhauled in favour of a points-based system, similar to that used in Australia, according to Home Secretary Priti Patel. Under this approach, visas could be allocated based on an applicant’s qualifications and professional expertise, focusing on those skills that are most in demand.

UK students currently studying abroad through the Erasmus+ scheme will be able to continue with their studies. But the funding of places for the 2020–2021 academic year is less clear. And the UK’s ongoing participation in the scheme after the end of the transition period will depend on the government’s negotiations with the EU.

The government is not, of course, without its post-Brexit plans for science. Proposals have already been mooted for the creation of an elite UK research funder to replace lost EU support, though how this new body would fit into the existing research funding infrastructure is unclear. The government has also discussed setting up a UK equivalent of the US Defense Advanced Research Projects Agency to champion research in emerging fields of science and technology.

The prime minister has sought to allay fears about the loss of research talent by suggesting that immigration restrictions on top scientists could be eased post-Brexit. The chancellor, Sajid Javid, has announced plans to ‘turbocharge’ funding for research and development, with a commitment to invest at least 2.4% of GDP by 2027, up from 1.69% – well below the EU average of around 2% – today. And further promises will no doubt be made as the general election campaign continues.

But science is not just about funding; it needs international collaboration, too. ‘Establishing a future relationship with the EU that preserves collaborations that have been built up over decades is a vital part of making sure that UK chemists can continue to collaborate internationally to advance scientific discovery,’ says Sheridan.

But the prospects for this remain uncertain. ‘I think it depends a great deal on the nature of the EU–UK trade relationship. If we’re in a trade relationship that involves close regulatory alignment, then I think it would be easier to have collaboration,’ says UK in a Changing Europe’s Hervey. ‘If we don’t have regulatory alignment, if we take what people are thinking of as an opportunity to diverge from European standards, then I think it would become very, very difficult.’