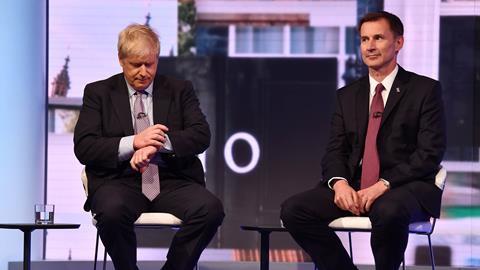 ‘Action is overdue,’ claim 11 of the UK’s leading research organisations as they call on the next prime minister to commit to ‘build[ing] a bold vision for UK research and development’. In the midst of the Conservative Party’s leadership race, the statement asks contenders to pledge to boosting science funding from 1.7% of GDP to 2.4% by 2027 and draw up a plan to ensure the country remains competitive after Brexit.

Three weeks after Theresa May resigned, two candidates – former foreign secretary Boris Johnson and current foreign secretary Jeremy Hunt – remain in the running to become the next leader of the Conservatives and, by extension, prime minister. So far, neither has made any commitments on science funding.

Now, science academies and associations – including the Royal Society, the Russell Group and Cancer Research UK – have released a joint statement urging the prime ministerial hopefuls to increase research spending to at least 2.4% of GDP by 2027 and 3% in the long run. Although the government had previously committed to a 2.4% target that includes both industry and government R&D spending, it isn’t on track to meet it until 2053. In 2017, the UK spent 1.7% of GDP on research. Other countries, such as Germany and South Korea, invest more than 3% and 4.5%, respectively.

However, ‘words and targets will not be enough’, they add. ‘The UK needs a coherent long-term plan to build our position as the global hub for new world-leading technologies, to draw on our strengths across multiple disciplines, to attract talent from around the world and to promote British entrepreneurship.’

The Conservative’s members are currently voting for their next leader and the result is expected on 22 July.