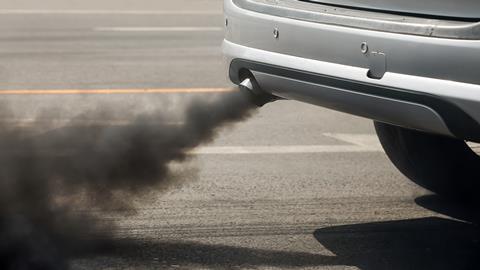 Carbon dioxide direct from a car’s exhaust has been captured and used to separate and purify metals. The technique could offer a much needed business incentive for capturing carbon dioxide to help mitigate climate change while offering a greener route for recycling economically important metals.

Carbon capture and storage (CCS) is touted as one of the main ways to tackle global warming. But currently CCS is too expensive to adopt widely enough to meet climate change targets. Finding profitable ways to use captured carbon before going on to store it, however, may give CCS the boost it needs.

Julien Leclaire’s lab at the University of Lyon, with co-workers at University of Turin, have used a dynamic combinatorial chemistry approach to show how waste carbon dioxide – even direct from a car’s exhaust – can be captured by industrial amines and then used to create libraries of ligands. These ligands can then be tailored to help separate and recover specific metals, including lanthanum, nickel and cobalt – all used in electric vehicle batteries.

‘This is the first time that two waste streams have been mixed together to yield a series of purified compounds in one pot,’ explains Leclaire. ’Our technology is compatible with currently operating CO2 capture units, brings added value and is compatible with downstream transformation or storage.’

Metal purification usually requires strong acids and bases to isolate a desired metal from an ore, but has a huge environmental footprint. Leclaire’s approach, however, uses carbon dioxide as a chelating agent to tune the affinity of ligands for metals using pressure and temperature triggers, making the process clean and green. ‘It’s a win–win,’ says Leclaire. ’Metal co-purification pays the price for CO2 capture, while CO2 fixation renders metal extraction greener.’

To demonstrate the system, the team injected diethylenetriamine (DETA) solution – an industrial polyamine used in carbon capture – into a mixture of lanthanum chloride and nickel chloride. When exhaust fumes from a car were bubbled though this, the DETA captured carbon dioxide to produce ligands that triggered preferential binding with lanthanum. Within minutes, lanthanum carbonate tetrahydrate crystals formed, while nickel bound to unreacted DETA and remained in solution . The materials were then separated in a centrifuge at yields and purities of 99% for each compound.

In another experiment, the researchers showed off their process on the electrode of an end-of-life battery, which was dissolved in acid to obtain a liquid containing lanthanum, nickel and cobalt. Commercially available CO2 was used as the trigger, while water and ethanol were used as solvents over several steps to isolate each metal before being separated by filtration. The team found that gentle heating allowed the metals to precipitate, while their carbon dioxide-binding species remained in solution.

’This represents a very clever gearing together of CO2 capture and metal binding chemistries within the same chemical system,’ comments Jonathan Nitschke, who investigates functional chemical systems at the University of Cambridge, UK. ‘Carbon capture is expensive, requiring political will beyond many governments’ abilities. When coupled to economically-favourable metal purification processes, however, carbon capture may gain the economic justification needed for it to be implemented.’