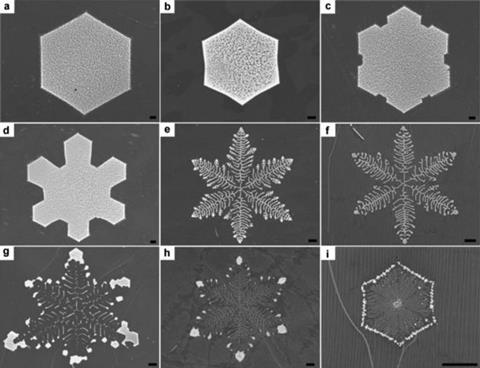 These beautiful flakes aren’t made of ice but are instead etched into a sheet of graphene. Yunqi Liu’s group at the Beijing National Laboratory for Molecular Sciences in China, etched the graphene flakes using a flow of argon and hydrogen gas. The group found that modifying the flow rate of the gases altered the pattern that was etched into the sheet. While low flow rates gave hexagonal holes as expected (top left), increasing the flow rate created more complex, dynamic patterns.

The more complex patterns that develop can be described as fractal, built from a repeating motif. Time lapse studies show that the fractal patterns etched in graphene start as simple branched lines that then have more and more lines branching off. The symmetry of the resulting patterns suggests that the etching occurs along lines of atoms in the crystal.