A new dirhodium catalyst targets a molecule’s most accessible tertiary C–H bond, even in complex steroids and hydrocarbons. It is part of a growing collection of catalysts that activate C–H bonds stereoselectively.

Carbon–hydrogen bonds in a molecule are relatively unreactive, so converting them into more reactive carbon–oxygen, carbon–boron, or carbon–nitrogen bonds is a useful trick in synthesising or adding functional groups to molecules. In recent years, chemists have developed various tools to functionalise C–H bonds. Typically these reactions rely on the C–H bond being ‘activated’ by proximity to other functional groups, or they guide a metal catalyst to react with one C–H bond using an additional molecular component. A big challenge, however, is picking out just one C–H bond from the many possibilities in a complex molecule. 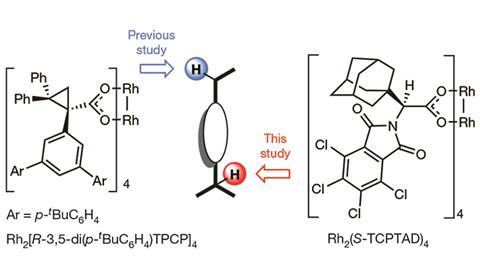 Huw Davies and his colleagues at the Center for Selective C–H Functionalization want to engineer catalysts that direct themselves to specific kinds of unactivated C–H bonds. But previous attempts to functionalise specific unactivated C-H bonds suffered from low site-selectivity.

Last year, Davies and his colleagues at Emory University reported a dirhodium catalyst that selectively reacts with the most sterically accessible secondary C–H bond in an alkane.1 Now the researchers have built a catalyst that can do the same trick with tertiary C–H bonds. 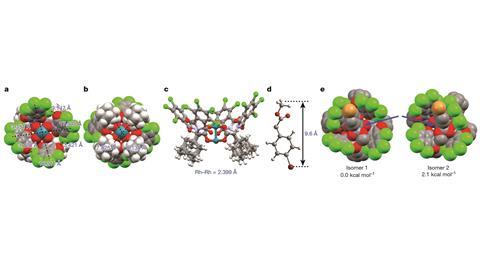 For this new catalyst, the researchers changed the ligands on their previous dirhodium catalyst to open more space around one of the metal centers.2 The result is a bowl-shaped molecule, whose shape imposes a steric restriction; the bowl cannot fit around bonds buried in the interior of a molecule so only the most accessible bond will react.

The researchers used this catalyst to functionalise a variety of alkanes with a donor–acceptor carbene, in as much as 93% yield and 92% enantiomeric excess. Molecular modeling revealed the reason for the reaction’s stereochemical preference: when the carbene binds to the rhodium, the catalyst’s ligands rearrange so that one face of the carbene is more available for forming a new bond than the other.

Tested on complex molecules, such as a lengthy hydrocarbon, vitamin E and cholesterol derivatives, again the catalyst ignored more reactive allylic or benzylic C–H bonds and picked out the most accessible unactivated tertiary C–H bond.

John Hartwig, at the University of California, Berkeley is impressed at the stereoselective control of this functionalisation because it involves a reaction between two molecules, and stereoselectivity is usually easier to control when a reaction occurs at two sites within the same molecule.

Davies hopes the work inspires other researchers to expand the range of carbenes and catalysts that can do the reaction.