Catalytically, is copper the new gold?

Approach for depositing copper on silica support influences how easily it oxidises, and in turn the reactions it catalyses

Researchers in China claim that they have changed the chemical properties affecting a copper catalyst’s electronic structure, making it more like gold or silver. The team, led by Jian Sun from Dalian Institute of Chemical Physics, Chinese Academy of Sciences, has devised a new approach to making catalysts that yield useful organic molecules from coal.

‘We observed the possibility of changing the electronic structure of a copper atom by external energy, which will make copper exhibit a noble metal-like chemical property,’ Sun tells Chemistry World.

Reacting carbon monoxide produced by burning coal with methyl nitrite can make dimethyl oxalate. Catalytically hydrogenating dimethyl oxalate can make a variety of products, with the outcome depending on how the catalyst used is prepared, explains team member Xiaoxuan Wei, from Zhejiang Normal University. Silica-supported copper is one of the catalysts that has been studied for this process but tends to oxidise, forming copper ions, more easily than silver or gold. This chemical property depends on the electronic structure of the copper atoms in the catalyst, Sun adds.

Previously, Chinese scientists had coated copper onto silica particles by dissolving copper salts in a mixture of water and ammonia, and then heated it to evaporate the ammonia. But Sun and their colleagues used a gas-phase sputtering approach, ejecting individual copper atoms from a sheet of the pure metal using high-energy argon plasma. The copper atoms then coat silica particles inside a hexagonal rotating chamber that the team made themselves. ‘The support powders are stirred by the rotating hexagonal barrel,’ Sun explains, meaning that copper coats the silica particles evenly, forming ‘clusters or nanoparticles’. 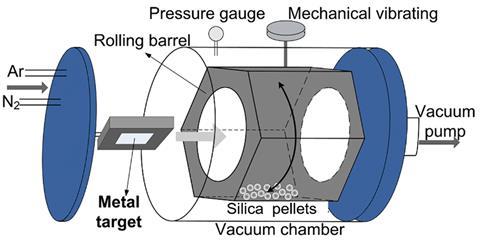 X-ray diffraction analysis indicates that catalysts produced by ammonia evaporation are copper phyllosilicates. By contrast, sputtering produces pure copper metal layers. Different x-ray spectroscopy approaches also show that it’s harder for the outermost electrons of sputtered copper atoms to escape. The resulting copper nanoparticles are therefore harder to oxidise. When the chemists use the sputtered catalyst in dimethyl oxalate hydrogenation, it predominantly makes methyl glycolate. That’s a significant change from the ammonia evaporation catalyst, which predominantly makes ethylene glycol, thanks to the involvement of copper ions.

Inorganic chemist Andrew Beale, of University College London, UK, says the study ‘does a pretty good job of experimenting with an unconventional catalyst preparation method and then tries to rationalise an unexpected enhancement in performance’. The approach ‘could conceivably be scaled if the observed effects translate to other catalytic materials’, he adds.