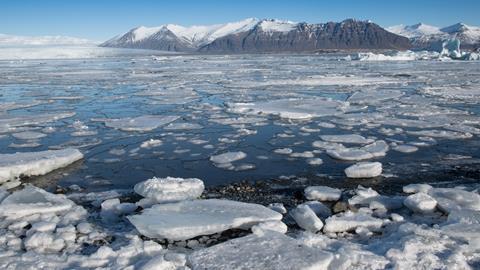 CFCs responsible for half of Arctic sea-ice loss

Halogenated compounds played a major role in global warming and Arctic sea ice loss in the late-20th century, a new study has found.

Organic halogen compounds are known to have depleted atmospheric ozone concentrations, famously contributing to the ozone hole over the Antarctic. But until now, few studies have examined their other effects on climate, beyond their impact on stratospheric ozone.

Now, an investigation led by Columbia University geophysicist Lorenzo Polvani has revealed the extent to which ozone-depleting substances (ODS) contributed to temperature rises and sea-ice loss in the Arctic by direct radiative warming, between 1955 and 2005.

On a molecule-by-molecule basis, halogenated organic compounds trap much more heat in the atmosphere than most other known compounds. For example dichlorodifluoromethane (CFC-12) has a global warming potential almost 11,000 times that of carbon dioxide. This means that, although ODS might exist in much smaller atmospheric concentrations than other greenhouse gases, their impact can be just as significant.

Polvani’s team calculated that one third of global warming during the second half of the 20th century was due to heat trapped by halogenated compounds. During this period, ODS were responsible for almost half of the warming and sea-ice loss witnessed in the Arctic.

Atmospheric concentrations of ODS peaked towards the end of the last century, following the implementation of the Montreal Protocol in 1987, which called for an end to their production. Polvani’s team say that their findings highlight ‘a new dimension’ to the treaty’s significance, and that the continuing decline of ODS will help to mitigate levels of Arctic warming and sea-ice melt over the coming decades.