Chameleon compounds from the cocrystal continuum

UK scientists have taken a new approach to making temperature-sensitive colour-altering molecular materials. Their strategy is based on a phenomenon where pairs of molecules with similar pKa simultaneously crystallise into differently coloured charged salts and neutral cocrystals. These metastable crystal states can interchange in response to temperature changes, altering their colours in response.

When heated or cooled, thermochromic materials undergo changes at the molecular level to switch between differently coloured structures. They can be used to sense temperature changes by transitioning between two or more structural conformations. Discovering new thermochromic materials depends on finding the right molecule, or combination of molecules, that act like this when they crystallise together. 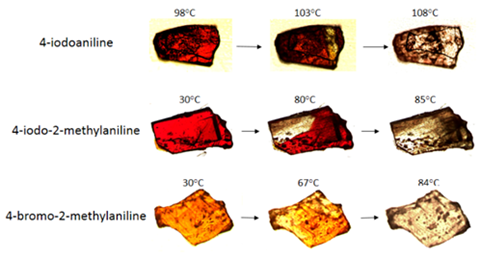 ‘We know how a molecule behaves but if it doesn’t give us the property we want we combine it with another molecule to give just the right electronic structure to get the colour transitions at the right temperature,’ explains Chick Wilson from the University of Bath, who led the work along with his Bath colleagues Lynne Thomas and Paul Raithby. This process usually relies on selecting pairs of molecules with suitable intermolecular interactions that can be used to predict how they will pack together in a crystal lattice, but often relies on chemical intuition and serendipity in finding the right crystallisation conditions.

The team started their investigation by looking at haloaniline molecules, which are known to often form coloured crystals with delocalised electronic structures. They discovered that certain pairs of haloanilines and benzoic acids with a difference in pKa between 0 and 1 crystallise together under the same conditions into two different crystal forms. One form was a neutral cocrystal of the two molecules, the other was an ionic salt in which protons had been donated from the acid molecules to the anilines. The coloured neutral cocrystals converted reversibly to their more stable, colourless, ionic salt form when heated, undergoing proton transfer in a solid-state transition. 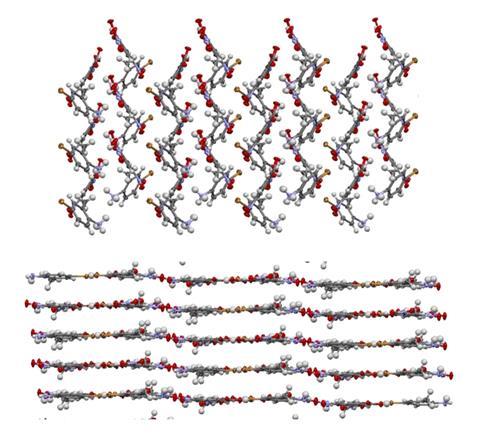 ‘This carefully designed study takes advantage of the grey area in the salt–cocrystal continuum,’ comments crystal engineering expert Delia Haynes of Stellenbosch University, South Africa. ‘This is a new and clever way of accessing switchable materials from organic components, and is sure to lead to a significant number of future studies using this design principle.’

Olga Vassilyeva, a crystal structure expert at the Taras Shevchenko National University of Kyiv in Ukraine, says crystal engineering focusing on cocrystal formation can obscure possible alternatives. ‘In this respect, this astounding finding is particularly valuable. It presents new prospects in the design of organic thermochromics and also encourages crystal engineers to look for other potentially interesting facets of cocrystals.’