Scientists in Belgium have developed a new strategy for making combination drugs, using inorganic salts to glue different active pharmaceutical ingredients together. This method could serve as a powerful tool for making unexplored multi-drug systems with enhanced therapeutic effects.

Combining multiple drugs into a singular dosage can improve patient compliance by reducing their pill load. Multi-drug cocrystallisation is one approach for achieving this goal; however, it is not without its hurdles. In particular, stability plays a significant role, as most compounds preferentially crystallise on their own rather than cocrystallising as a multi-component crystal. Now, Tom Leyssens from UCLouvain and his colleagues have developed an imaginative strategy to overcome this challenge.

Their strategy creates ternary ionic cocrystals using an inorganic salt bridge to ensure that the intermolecular interactions in the multi-drug cocrystal are more stable that the parent crystals. This allows two drugs to cocrystallise that would not without the linker.

To test their approach the team combined anticovulsant drug levetiracetam and its racemic intermediate etiracetam, with nicotinamide – a form of vitamin B3 – and its isomer isonicotinamide, using CaCl2 as the inorganic linker. While each of the four pharmaceuticals was able to form a binary crystal with CaCl2, they found that without, CaCl2, levetiracetam or etiracetam would not cocrystallise with nicotinamide or isonicotinamide. Only three of the four potential ternary cocrystals formed successfully. Interestingly, CaCl2 is unable to link etiracetam and nicotinamide, highlighting the important effect of chirality on the formation of stable cocrystals.

‘This strategy will be very useful for a pair of drugs which do not have the direct connecting sites or cannot form into stable cocrystals,’ comments team member Lixing Song. ‘For example, many drug molecules consist of nitrogen electron-rich groups, such as pyrrolidinone, pyridine or pyrimidine, which all are hydrogen-bonding acceptors, therefore, they cannot cocrystallise successfully. The inorganic salts can serve as the bridge to couple them together.’ 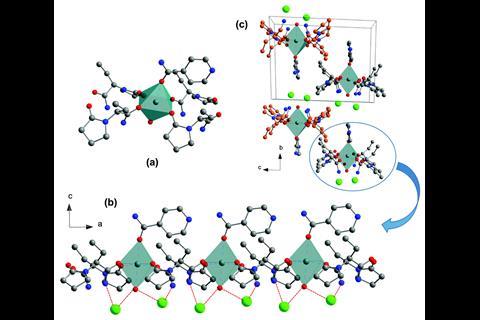 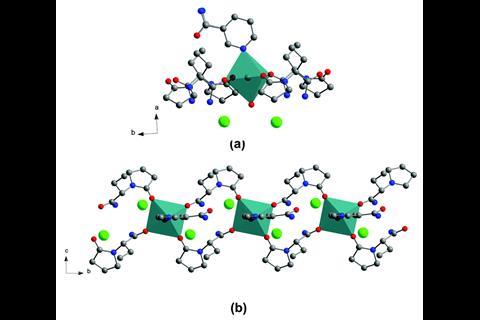 To explore the potential of dual-drug ternary ionic cocrystals, the team investigated the solubility of the ternary drug compounds relative to the parent drugs. Mino Caira, director of the Centre for Supramolecular Chemistry Research at the University of Cape Town in South Africa, says ‘it is interesting to note that for the particular systems investigated in the study, the presence of trace water is crucial for the formation of the desired products, a phenomenon that has been observed previously in other areas of synthetic chemistry.’

Pharmacist Katharina Edkins, of the University of Manchester in the UK, who specialises in the pharmaceutical solid state, calls the approach interesting and imaginative. ‘Whilst the presented combination of model compounds is not directly translatable into a pharmaceutical product, this study shows a novel approach to generate combination preparations for the treatment of multi-morbid patients. I am looking forward to seeing this approach applied to pharmaceutically relevant drug and dose combinations.’

The team recognises these concerns, however they say that they have used an excellent model system and shown that non-covalent bonding through a central inorganic cation can allow cocrystallisation of two chemically different drug molecules. In the future, the group intend to test their strategy on new and realistic multi-drug systems, and conduct further research into the pharmacokinetics and bioavailability of ternary ionic cocrystals.