Cocrystal intermediate is first for mechanochemistry

The Knoevenagel condensation is a widely used organic reaction for making substituted electrophilic alkenes and research has shown that mechanical force can initiate it. While mechanochemical reactions can be quicker and less wasteful, their mechanisms and kinetics are often unknown and hard to determine.

Now, a team led by Krunoslav Užarević and Ivan Halasz at the Ruđer Bošković Institute, Croatia, has uncovered the reaction mechanism for the mechanochemical Knoevenagel condensation between barbituric acid and vanillin. Researchers usually probe mechanochemical reactions by sampling the reaction mixture at predesignated intervals, however these scientists used their own in situ Raman spectroscopy technique, pioneered in 2014, along with synchrotron x-ray diffraction to monitor the reaction. This involved measuring the Raman spectrum in situ every 10 seconds, without interrupting the reaction, and looking for changes in the chemical composition of the monitored molecules. 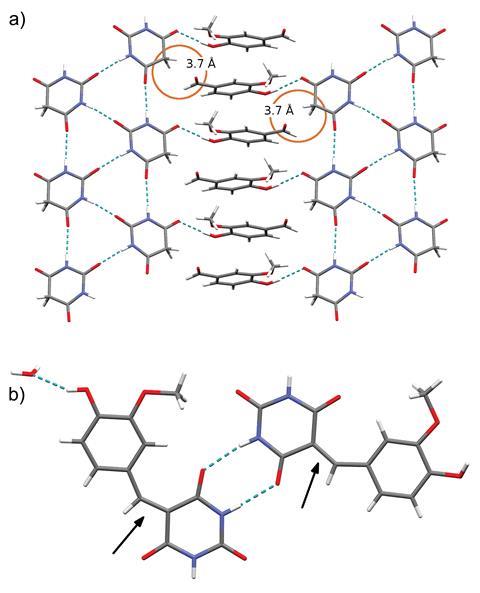 (a) Analysis revealed the intermediate to be a 1:1 cocrystal of barbituric acid and vanillin. (b) The arrows point to newly formed C-C bonds

Užarević says ‘prior to this work, the mechanism was assumed to be direct condensation between the CH2 group of barbituric acid and the aldehyde oxo group of vanillin, followed by elimination of one molecule of water, however we now know that these two solids recognise each other and form a supramolecular solid before the reaction takes place.’

The cocrystal that the team observed contains ribbons of barbituric acid molecules, held together by hydrogen bonds, with the vanillin molecules packed in stacks. And it arranges the molecules so that their reacting groups are only 3.7Å apart. This perfect alignment allows the condensation reaction to proceed upon further milling.

Himanshu Jena, an expert in synthesis, self-assembly and catalysis from Gent University, Belgium, says ‘observing a cocrystal during ball milling is a big achievement and explaining the cocrystal formation via crystal structure analysis is an important step for easy understanding’. And Duncan Browne, an expert in mechanochemical synthesis from Cardiff University, UK, says ‘this work is particularly interesting as it makes an important observation at the interface of the fields of organic chemistry and crystal engineering. These types of observations and capabilities will certainly permit a greater understanding of the field of mechanochemistry and solid-state synthesis’.

Užarević says his team intend to expand the in situ monitoring technique to understand other organic transformations.