A key class of biological molecules neglected in the search for life’s chemical origins could have appeared spontaneously before organisms, UK scientists say. 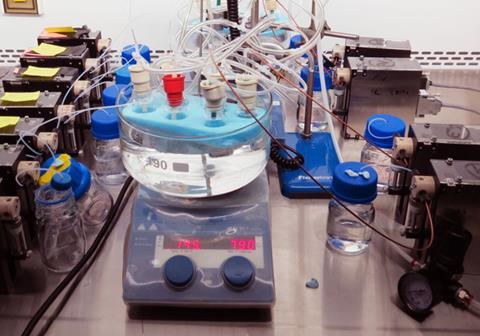 Using an automated system Lee Cronin’s University of Glasgow group searched for conditions for assembling amino acids into protein chains. To make these peptide chains, cells typically use sophisticated biological factories, while chemists need complex synthetic strategies and expensive catalysts. But Cronin and colleagues have identified direct, simple approaches that they feel suggest that peptides could have formed much more easily than previously imagined before life was established on Earth.

‘People have been trying to turn amino acids into peptides for 50 years under prebiotically plausible conditions, taking dilute solutions and heating them,’ Cronin emphasises. In some leading examples, solutions containing salt couple two amino acids. However, both residues’ carboxylic acids often grab the other’s amine, making a diketopiperazine ring rather than a straight chain, and yields are typically just a few percent. ‘We can make pure peptides, we get 50% yield and we’ve made chains up to 20 amino acids,’ Cronin says.

No gimmick, no panacea

The Glasgow team is known for lab-hacking, such as developing self-optimising flow chemistry systems. While such tools can serve many applications, they use them as a ‘search engine’ for origin-of-life chemistry. Initially the team’s system was simply a ‘cheap liquid handling platform’, Cronin says, a series of pumps coordinated by a central programme. The Glasgow chemists added solutions of amino acids and salt in water to several hot, empty glass vials in parallel, and continued heating them to boil water off. They varied conditions including temperature, concentration, pH, the number of wet/dry cycles and cycle duration.

90–130°C temperatures and alkaline conditions coaxed the simplest amino acid, glycine, to form a chain 12 units long in around 50% yield in a single cycle. Further optimisation extended this to 20, and Cronin hints that they’ve since gone much longer. Combining glycine and other, more complicated, amino acids achieved similar results, with extra amine or carboxylic acid attachment points forming branched structures. Most importantly, they were able to explore how the peptides formed. The scientists formed chains up to 10 amino acids long starting from diketopiperazine rings, suggesting that bonds were being made and broken at the same time in their process.

Despite their search engine, collecting this information still took Cronin’s team 18 months. ‘The robot is no gimmick, but it’s no panacea either,’ Cronin says. ‘It speeds up the search, but without my group interrogating analytical data we would have got nowhere.’

These results reinvigorate an overlooked scenario for life’s emergence on Earth. Assuming amino acids can form, as the University of Chicago’s Stanley Miller and Harold Urey suggested in 1953, these new findings show they could then form peptides, Cronin emphasises. ‘We are excited because this may have implications for making peptides without needing a genetic system,’ he says. That’s important because without an effective natural route to peptides theories have largely focused on RNA catalysts playing a dominant role in chemical networks from which life emerged.

It is probably too early for a complete rethink, however. Jeffrey Bada from the University of San Diego’s Scripps Institution of Oceanography asserts that conditions for wet/dry cycling would have been limited prior to life’s emergence. Amino acid concentrations would also have been much lower than in these experiments, he adds. ‘The results are interesting, however, and one important aspect is that diketopiperazines, which limit further polymerisation of amino acids, are not as great a barrier at high temperatures.’

We can’t go back in time, observes Luke Leman from the Scripps Research Institute, a separate organisation from Bada’s, also located in La Jolla, California. Therefore, we may never know exactly how amino acids coupled to make peptides on the way to life, he points out. However, the Glasgow team’s work is ‘one of several recent findings underscoring that [it] may not be as difficult as once thought’, Leman says. He’s surprised by how much peptide the chemists get and how long the chains are. ‘The paper also raises the intriguing idea that wet/dry cycles can break peptide bonds at the same time as making them, potentially leading to dynamic combinatorial peptide libraries.’