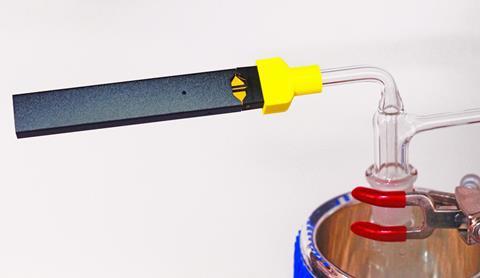 Studies on the chemical composition of e-cigarette liquids are raising concern that regulation is lagging behind the data.

The Yale Tobacco Center for Regulatory Science is a National Institute of Health and US Food and Drug Administration funded research group tasked with investigating the influence of flavours on tobacco addiction. Part of this work involves assessing the composition of e-cigarette liquids being sold to users. E-liquids contain mainly nicotine, flavourings and a solvent in which ingredients are dissolved. Flavouring molecules like vanillin, benzaldehyde or cinnamaldehyde are aldehydes that give e-cigarettes their various flavours, while the solvent is an alcohol, usually propylene glycol or glycerine. However, according to Hanno Erythropel, an analytical chemist at the Yale centre, a basic knowledge of chemistry tells you that aldehydes and alcohols readily react to form acetals.

‘If I told you I’m taking five chemicals, I’m mixing them to make what I call an e-liquid, why would you assume that they wouldn’t react with one another?’ Erythropel asks. The reaction between the aldehyde present in several flavour molecules and two or more hydroxyl groups on the solvent result in the formation of a new compound – an acetal. In the case of e-liquids that use a glycerine solvent, there are three hydroxyl groups available, meaning the reaction can produce structural isomers along with stereoisomers. Knowing this Erythropel prepared simplified e-liquids containing both the flavour molecules and the solvents and confirmed the formation and presence of flavour aldehyde–solvent acetals over the course of about two weeks of the mixtures sitting at room temperature.

Next, Erythropel analysed the vapour generated from several commercial e-liquids containing flavour aldehyde–solvent acetals using a custom-built vaping machine, and found that up to 50–80% of the acetals found in solution were also present in the vapour, meaning they are reaching the user’s airways. According to Erythropel, the acetals also remained stable in a physiological aqueous solution, with half-lives greater than 36 hours.1 Sairam Jabba at the Duke School of Medicine then performed in vitro studies on cultured lung cells and found these new compounds have a potent effect on cellular and protein functions that affect cell metabolism and cause cell death2. ‘These reaction products have different toxicological properties from their parent flavour compounds and could essentially contribute to the health effects of the e-cigarette use,’ he says.

This is important for informing regulation, says Neal Benowitz, professor of medicine emeritus at University of California, San Francisco, because it shows that you can’t just measure flavour compounds – you also have to measure potential breakdown or reaction products. Shannon Kozlovich, programme manager for Equality California’s Tobacco Control Program, agrees. ‘You have to test the toxicology of the entire complex mixture, not just each individual component,’ she says, and this is currently not the case.

For Kozlovich, this is another example of e-cigarette regulation in the US being reactionary. In 2009, the US Tobacco Control Act was passed and banned the sale of flavoured cigarettes as a way to reduce their attractiveness to children. However, e-cigarettes were not included until January 2020. It was only then that the Food and Drug Administration released enforcement priorities on electronic nicotine delivery devices, says Kozlovich. These priorities, however, only targeted flavours in non-refillable pod-based products, essentially covering one brand of product, Juul, and not the other refillable or disposable brands available. Furthermore, the regulations did not include menthol despite the agencies own 2011 report stating that data indicates that menthol is likely associated with increased smoking initiation by youth and greater addiction. This is attributed to the cooling and anaesthetic effect of menthol reducing the harshness of smoking. Several countries, as well as the EU, have banned menthol in combustible cigarettes but another finding by Erythropel suggests e-cigarette companies are already exploring ways to replace menthol’s cooling effect.

Erythropel compared the compositions of European Juul products with Canadian and US versions.3 EU law restricts the level of nicotine in e-cigarettes to about one-third of what’s allowed in North America. Along with less nicotine, the European products have fewer flavourings too. Erythropel cannot say why the company chose to do this but he found that the reduced level of menthol used in the mint flavoured e-liquid was being replaced by the synthetic cooling compound N-ethyl-p-menthane-3-carboxamide or WS-3. ‘They apparently felt the need to compensate that lost cooling effect by using this synthetical.’ Along with the evidence showing the cooling effect increases retention and addiction, the toxicity of synthetic coolants are also unknown. Many synthetic coolants and menthol analogues are available, having been created for products such as shaving cream. ‘If the FDA regulates menthol then they really need to understand the subtleties because for sure if anyone can get around it, they will try to,’ says Benowitz.

‘At this stage where there is so little regulation it’s really about understanding what we’re dealing with in the liquids and in the aerosol and what implications that may have,’ says Erythropel. ‘One of the things that we are really trying bring out is this idea that it’s not very well-regulated, this whole business of e-liquids.’