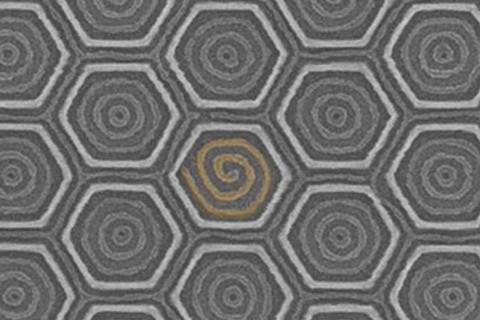 Polymers have been grown into nanosized spirals inside hexagonal templates by a team of US researchers. These chiral nanospirals could be used to sense and analyse the ‘handedness’ of biomolecules such as DNA or be made into new materials.

Caroline Ross’ team from the Massachusetts Institute of Technology found that adding a tiny notch to the side of the circular templates or using hexagonal pits makes the polymer spontaneously form chiral spiral patterns. The simple template can be used to fabricate thousands of chiral nanoshapes at once while allowing complete control over the spiral’s handedness: changing the orientation of the notch allows the team to switch between a clockwise and counter-clockwise spiral. Making the notch wider or adding two opposing notches creates double spiral patterns.

Computer simulations showed that the spiral pattern is energetically favoured over concentric rings, which need to strain and distort to fit around the notch. Ross’ team thinks that their approach could even be extended to make 3D structures such as helices.