A new cobalt complex could reduce the cost of one of the world’s most widely-used industrial processes – hydroformylation – by replacing the expensive rhodium catalysts currently used by industry.

Hydroformylation, sometimes called the oxo process, produces aldehydes by reacting alkenes with carbon monoxide and hydrogen. It’s heavily used in the refinement of petrochemicals, making more than 12 million tonnes of products each year.

When the reaction was discovered in the 1930s, the very first catalyst used was a simple cobalt complex: HCo(CO)4. But since the 1960s, much more active rhodium complexes have dominated. However, rhodium is scarce and extremely expensive; earlier this month its price topped $10,000 (£7500) per ounce, driven mostly by its use in catalytic converters. 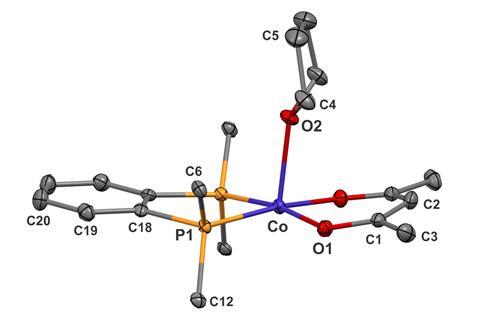 Cobalt is also in high demand due to its use in rechargeable batteries, and with the majority of the global supply coming from just one country, political forces can affect its availability. However, its price is about 0.01% that of rhodium, so a return to cobalt-based hydroformylation catalysts could still have a significant advantage, if their activity can be improved.

Now, a new cobalt complex developed by George Stanley and his team at Louisiana State University is driving hydroformylation reactions at rates close to those achieved by state-of-the-art rhodium catalysts. The key to the complex’s impressive activity, Stanley explains, is its positive charge – contrary to the conventions of rhodium complexes, where the best catalysts are neutral species.

The first step in the catalytic process involves dissociation of a carbonyl ligand from the catalyst to create room at the metal centre to coordinate the alkene. So the original cobalt hydroformylation catalysts were hampered by their relatively strong Co–CO bond. Using a positively charged species overcomes this problem, says Stanley, because ‘the cationic charge on our cobalt … contracts the metal d-orbitals, so the carbonyls appear to be much more labile’.

Rhodium-based hydroformylation catalysts typically operate at 1000 times the rate of standard cobalt catalysts. But the Louisiana group’s system appears to significantly close the gap. ‘We compared head-to-head hydroformylation for [3,3-dimethylbutene] between our catalyst and two of the rhodium catalysts, and we’re basically within a factor of 20 of the rate of rhodium,’ says Stanley. 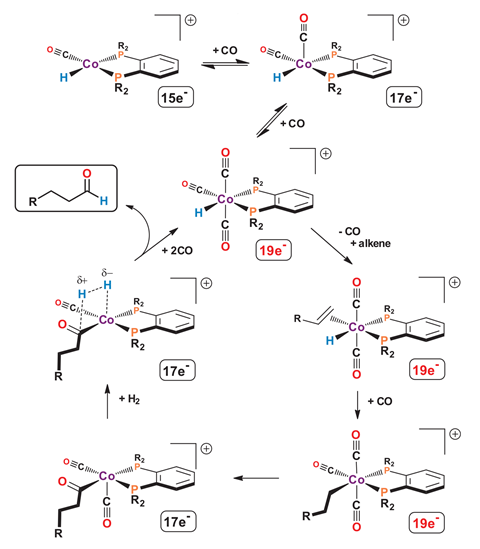 The catalyst is much more active than the original cobalt hydroformylation catalysts, but still a few orders of magnitude away from the rhodium species currently in use.

Matt Clarke, an expert in transition-metal catalysis based at the University of St Andrews, UK, is impressed with the findings. ‘In just about all examples of abundant metal catalysis, high activity is vital – since the cost of a catalytic reaction is often affected more by how much catalyst you have to use to get a decent reaction rate, than the cost per gram of the catalyst,’ he says. ‘To have discovered a cobalt catalyst that gets within sight of the rates from rhodium catalysts is a great achievement.’

‘This should inspire researchers, especially in industry, to test out this catalyst class to make their products,’ adds Clarke. ‘It looks a really promising lead if it can be used beyond these model substrates.’

For Stanley, the discovery is an illustration of how even well-studied processes can still throw up surprises. ‘I think there’s still a lot of holes in science for people to study,’ he says. He notes that most research in hydroformylation catalysis focused on neutral rhodium species, which have the benefit of being diamagnetic and therefore easy to study. ‘Work showed that you had to get away from a cationic charged rhodium mono-metallic systems in order to get a good rhodium hydroformylation catalyst. And I think that really put people off of looking at, for example, cationic cobalt starting materials,’ says Stanley. ‘I think this is one of those classic examples of: don’t be afraid to look at new things.’