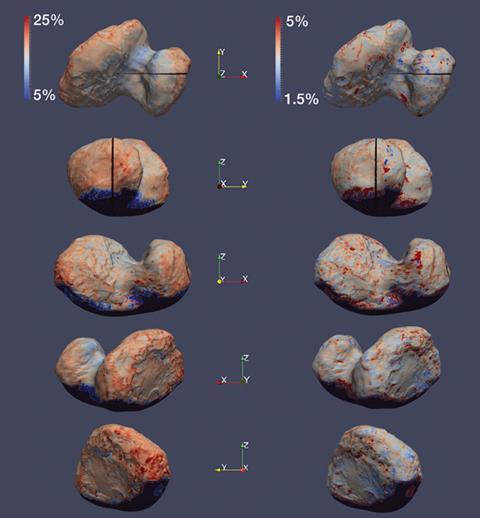 A layer of organic material unlike anything seen on any other comet humans have studied enfolds comet 67P/Churyumov–Gerasimenko, Rosetta probe scientists have revealed. Spectrometry data shows its sunlit surface enveloped by a carbon-based coat, without significant ice cover.1

‘We’re looking at a comet that’s possibly more pristine, more representative of the early moments of the solar system than others,’ explains Fabrizio Capaccioni from the Italian National Institute for Astrophysics (INAF). Along with other data, the measurements provide big early steps towards Rosetta’s aim of deciphering ‘the origins of the solar system and/or life on Earth’.

Capaccioni leads Rosetta’s Visible and InfraRed Thermal Imaging Spectrometer (VIRTIS) team. VIRTIS can monitor sunlight reflected off comet 67P, hunting for wavelengths of light that have been absorbed by molecules on its surface. The VIRTIS team is now reporting the very first of this data, recorded from August to September 2014.

Nitrogen’s absence would stymie the hunt for life’s origins. Capaccioni admits that without it an important ingredient for forming amino acids, ‘the building blocks of life’, is missing. ‘We will keep looking,’ he adds. Work is continuing to improve the currently vague chemical analysis and Capaccioni says the VIRTIS team will soon publish further discoveries made since September. Scientists behind chemical instruments such as COSAC and PTOLEMY on the Philae lander, which also reported detecting unspecified organics, are likewise due to publish detailed analyses soon.

Birth of a solar system

Maria Womack, who leads the stellar and planetary astronomy grant programmes at the US National Science Foundation calls the spectrographic images ‘truly gorgeous’. ‘Probably the most notable result is that the spectra are a poor match to carbonaceous chondrites, which are some of the most primitive known meteorites,’ she says. ‘Detailed studies will be invaluable for understanding what conditions were like where the comet formed.’

This prospect has Capaccioni excited, as he believes 67P could contain material like the nebula that became our solar system. ‘Organic compounds are formed in molecular clouds such as those existing before the solar system was born,’ he explains. The molecular clouds would initially have contained solid grains where mixtures of water ice and ices of simple organic compounds like methane, methanol, carbon dioxide and carbon monoxide were present. Energy from ultraviolet light or cosmic rays could then have converted these simple molecules into larger organics. Similar phenomena should have also occurred in the pre-solar nebula’s outer reaches, where ices were safe from sublimation by the growing Sun’s heat.

VIRTIS’s results are among seven newly-published papers from Rosetta. Among them, data from the ROSINA mass spectrometry tool on the composition of the coma, the gas cloud surrounding 67P’s nucleus, support Capaccioni’s formation hypothesis.2 ROSINA shows the coma is mostly water, carbon monoxide and carbon dioxide. Gas quantities vary as the comet rotates, because they erupt from different parts of its surface as the sun’s warmth drives them to sublimate from their icy forms. The large abundance of carbon monoxide marks 67P out as being especially ‘pristine’.

Measurements from Rosetta’s OSIRIS imager also back the ‘primordial accretion’ model. By analysing 67P’s shape and rotation, OSIRIS researchers put its bulk density at less than half that of water, with a porous, fluffy nucleus of dust, rock and frozen gas.3 The porosity is consistent with Capaccioni’s idea of the comet’s origin.