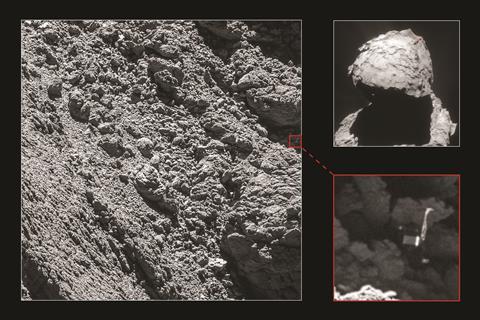 Philae has been lost since November 2014. The Rosetta comet probe has finally found it

Instruments on the European Space Agency’s (Esa) Rosetta spacecraft have analysed dust from comet 67/Churyumov–Gerasimenko and shown the organic matter to be more primitive than that of the oldest meteorites to have reached Earth. The results come as Rosetta’s on-board camera finally located the lost Philae lander.

Dust from the comet was sampled by Rosetta’s cometary secondary ion mass analyser (COSIMA), which comprises a microscope and mass spectrometer. It collected thousands of tiny 100µm grains of dust and characterised their macromolecular organic matter, comparing two typical comet grains, dubbed Kenneth and Juliette, with organic material from carbonaceous meteorites that have been analysed in the past. The team showed that the organic matter from the comet has a higher hydrogen content than meteorites, which suggests the comet was in a more primordial state than the meteorites’ parent bodies, as chemical processing in the parent body can decrease hydrogen levels.

These findings confirm that cometary dust contains organic matter which undergoes little alteration,’ says Nicolas Fray of the University of Paris-Est in Creteil, France, whose team analysed the COSIMA data. ‘It also shows that the formation of organics could be quite complex with several potential sources.’ He adds that it is still not possible to determine precisely where and when the organics formed. ‘Particles were created either in the interstellar medium before the formation of the proto-planetary nebula or in the proto-planetary disk during early solar system formation.’ 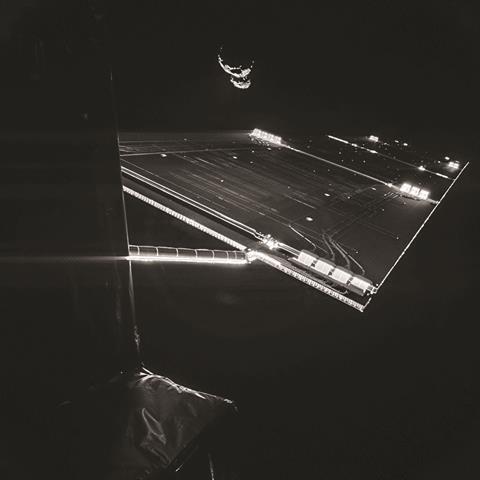 Comet 67P photobombs Rosetta during selfie. The Rosetta mission is due to end in just a few weeks

Maria Womack, an astronomer at the University of South Florida, US, who was not involved in this work, says the result is ‘not a complete surprise’ as comets have long been suspected of being more primitive than asteroids, but adds that knowing the proportions of hydrogen and carbon in such ancient material can help explain how the organic matter on meteorites and other bodies may have been processed. ‘This work shows the value of “going there”,’ she says. ‘They examined tiny grains with an ion mass spectrometer. You cannot do this with telescopes. Kenneth and Juliette are probably the oldest particles in the solar system ever studied.’

Meanwhile, Esa has released photos revealing the location of the Philae lander on the surface of 67P. When Philae landed in 2014 it was only able to function for three days before its batteries ran out of power and it lost contact with Earth. It did not recharge as the comet moved closer to the sun, which led researchers to suspect it had come to rest in a shady spot. The images – sent just a few weeks before the Rosetta mission is due to formally end – confirm this. The lander is pictured sitting beneath a rocky overhang.