Engineered immune cell therapies show promise in early cancer trials, prompting firms to compete for a foothold in the field

The biopharmaceutical industry is getting excited about chimeric antigen receptor T-cells, or CAR-T cells, designed to harness the cell-killing power of the immune system. T-cells are re-engineered to carry receptors targeting a surface antigen present on cancer cells, before being dosed to the patient.

Although the technology is still in its infancy and unproven, CAR-T has already generated a lot of interest among pharma companies, buoyed by some early results and the promise shown by other immuno-oncology approaches. Amgen, for example, is collaborating with US biotech Kite Pharma. Merck Serono of Germany is working with Intrexon, which also has a deal with Ziopharm Oncology. Celgene has been collaborating with Bluebird Bio for a couple of years, while Novartis is working with scientists from the University of Pennsylvania, US. Pfizer invested in French company Cellectis last year; the Paris-based outfit is also working with its compatriot Servier. With several other biotechs also working on CAR-T cells, such as Juno Therapeutics and Bellicum Pharmaceuticals in the US, and Belgian company Cardio3 Biosciences, further deals are likely. 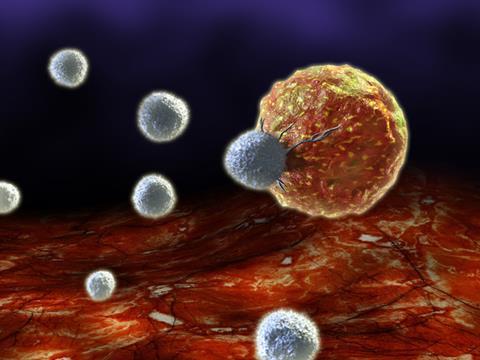 Novartis has conducted early stage clinical trials in blood cancers, as have a couple of biotech companies, including Juno and Kite. Mark Frohlich, Juno’s executive vice-president for development and portfolio strategy, describes initial results as encouraging. ‘Across several different trials we are seeing complete remission rates of the order of 90% in end-stage leukaemia patients,’ he says. ‘This is very different from salvage chemotherapy, where you would expect 10–20% in these patients who have, usually, failed many other therapies. And in non-Hodgkin lymphoma we’re seeing an overall response rate of approximately 60%, which is also highly encouraging.’

These research programmes, in common with much of the most advanced work in the field, target the CD-19 antigen that is only found on B-cells. ‘People can live without B-cells, as you can transfuse immunoglobulin for the rest of their lives,’ says John Lin, chief scientific officer of Pfizer’s biotechnology unit Rinat. ‘This gives us the opportunity to engineer antitumour CAR-T cells by inserting a gene for an antibody that recognises CD-19.’

Most CAR-T cell projects focus on autologous cells – those harvested from individual patients. Cells need to be transformed for each patient, which takes time (Juno’s Frohlich says 10–14 days, although they are working on speeding this up) and is very expensive. In contrast, the Pfizer–Cellectis collaboration is developing allogeneic cells, which have been harvested from a donor and modified to prevent rejection, although there is some debate about how long these will last within the body after administration.

‘We believe science can overcome these problems, as we understand the immune system and tissue rejection,’ Lin says. ‘It should be feasible, and more patients could benefit from this type of therapy.’ He hopes they will start clinical trials by the end of 2016.

Other cancer targets are possible, and CAR-T cells may also work in solid tumours. The challenge is finding a target, like CD-19, that is largely expressed only on cancer cells, and not on healthy ones. ‘We’re actively engaged in selecting targets that appear to have good specificity for the tumour cells and not normal cells,’ Frohlich says. ‘We have a number of programmes that will enter the clinic within the next year, which will give us a good indication of the ability of cells to work in solid tumours.’

CAR-T before the horse?

One drawback is the potential to over-activate the immune system, causing cytokine release syndrome, or CRS. Several people have died during clinical trials as a result of CRS, and second-generation products are being engineered by companies such as Juno to circumvent this. Bellicum, meanwhile, is engineering a molecular ‘switch’ into the cells that allows small molecules to activate or switch off the signalling cascade in the immune system.

However, despite those excellent early clinical results, Datamonitor Healthcare senior analyst Joe Hedden says there are limitations in how commercially successful this kind of therapy could be. Cost, clearly, is an issue. ‘I don’t think it will be available for everyone,’ he says. ‘I think the way to get it past the payers is to sell it as a replacement for hugely expensive bone marrow transplants.’

Hedden believes the future may lie in allogeneic therapies. ‘If you can get the same efficacy, or close to it, with an off-the-shelf therapy, manufacturing costs will be lower and it might facilitate their use earlier in the treatment cycle, particularly if it removes future costs,’ he says. ‘I think it will still be more expensive than an antibody, and safety needs to look better. As a last resort therapy, you can probably risk CRS, but for patients who might have other treatment options, then you need to show the toxicity is better.’

But, as Lin says, for some last-resort acute lymphocytic leukaemia patients it has already been a lifesaver. ‘Now people are talking about a cure for this dreadful disease,’ he says. ‘It’s incredibly exciting to see patients who have come back to life after being given a death sentence.’