Niobium tungsten oxides, with a crystal structure that allows lithium ions to zip in and out, could light the way towards super-fast battery charging in vehicles.

One approach to speeding up lithium ions’ movement in and out of a battery’s electrodes – essential for fast charging – is for chemists to nanosize the active particles. This reduces the distance the ions have to travel. Unfortunately, this expands the volume, increases costs and promotes instability of the material.

‘In the nickel cobalt aluminium oxide (NCA) used in electric vehicles, the NCA layers expand when you pull out the lithium ions. Pull too many lithium ions out, and the layers collapse and restrict lithium transport,’ explains Clare Grey, from the University of Cambridge, UK. This also applies to lithium cobalt oxide (LCO), the preferred cathode in mobile phone batteries. 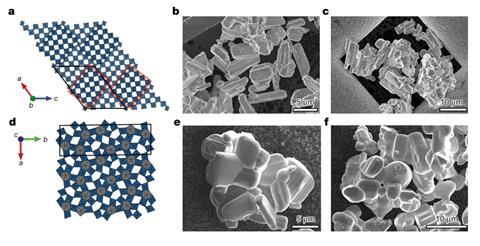 Now, Grey’s team has made two materials with open tunnel structures that are stable during cycling and allow the lithium ions to move unimpeded. The niobium tungsten oxides – Nb16W5O55 and Nb18W16O93 – could be useful anode materials, replacing graphite, for rapidly charging systems, such as large buses or trams. The key is their clever crystallographic properties, which buffer the strains and stresses associated with reversibly storing a considerable amount of lithium.

‘Expansion is limited to 5.5% and 2.9% for both crystals under certain conditions compared to the pristine materials,’ notes Colm O’Dwyer, a materials scientist at University College Cork in Ireland. Typically, cathode expansion is higher, and for anodes such as silicon it can reach 200–350%, he notes. ‘Hence the need to nanoscale them. This work avoids the size reduction needed, by using a structure that avoids large scale swelling. It does this by using an inbuilt anisotrophy: expansion in one direction is offset by contraction in another.’

The crystal chemistry, at the atomic level, also prevents ordering of the stored lithium ions and structural rearrangements that would slow down lithium movement during fast cycling.

Grey warns that this is just one piece of the fast-charging jigsaw puzzle: ‘Every battery component has to be optimised for fast charging and then you have to design the whole infrastructure too.’ If you had a car battery that would charge in a minute, you would fuse all the electrical circuits in your house, she adds.

The materials would not deliver as much energy by weight as a standard lithium-ion battery. ‘They are most suited to applications where space limitations are more critical than weight,’ notes team member Kent Griffith. ‘In an electric vehicle, one might imagine that the whole car battery need not be required to deliver high power or charge rapidly but that there could be a two component system with these materials used for acceleration and fast charging to complement lighter and cheaper graphite anodes for the rest.’