Expanding polymer takes the heat out of lithium batteries 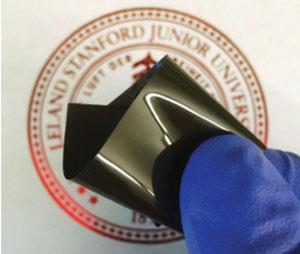 The thermoresponsive film acts as a fail-safe, reversibly switching off overheating batteries

Scientists in the US have designed a reusable lithium-ion battery that will shut down under extreme temperatures and only work again once the device has cooled. The innovation may help to prevent battery fires in specialised lithium-ion technologies.

Found in everything from laptops to smart watches, lithium-ion batteries are ubiquitous in the modern world and have revolutionised consumer electronics. But flaws have become apparent when the cell is used in some specific industrial settings, such as aboard Boeing’s new 787 aeroplanes.

If a lithium-ion battery is shorted or overcharged, heat is generated as a series of exothermic reactions are triggered. As the organic electrolyte is flammable, a battery short can lead to a fire or, as the pressure builds, even an explosion. Other teams investigating the same problem have filmed lithium-ion battery explosions in real-time.

This thermal runaway effect limits the voltage window lithium-ion batteries can operate over and their energy storage capacity. It could prove to be an escalating problem in such an energy-intensive age, according to Zheng Chen, a chemical engineer from Stanford University. ‘As the energy stored in batteries increases, safety becomes a more and more serious problem,’ says Chen.

Although there are internal fail-safes that can shut down an overcharging battery, the process is often irreversible and the cell cannot be used again. Chen and his colleagues looked to thermoresponsive materials to solve this problem.

The team melted polyethylene and mixed the molten polymer with spiky, graphene-coated nickel particles. The mixture is then coated onto a battery electrode, before being placed in the organic electrolyte.

At room temperature, the nickel balls are distributed evenly throughout the 15µm polymer film and are touching each other. The battery is able to operate with a high electrical conductivity and a very low resistance as a quantum tunnelling effect takes place between adjacent spikes.

If any rapid heating occurs, the polymer film expands. This expansion forces the nickel particles to separate within the matrix and electrical conductivity ceases. Chen and his colleagues noted that the resistance of the cell increases massively in less than a second. Once the battery cools to room temperature, the polymer film contracts and the nickel particles are able to conduct electricity again.

Chen believes such a safety feature can be incorporated into current battery manufacturing. ‘Polyethylene is one of the cheapest polymers,’ says Chen. ‘The nickel particles are also commercially available with reasonable cost.’

Gregory Offer, a battery and fuel cell researcher from Imperial College London, is impressed with the work and believes it will ‘represent a substantial breakthrough in lithium-ion batteries’.

But he warns that scaling up the safety innovation will be challenging. ‘Even if this is the most amazing innovation in the world, if it’s too expensive [and] it’s not possible to drop it into existing manufacturing methods, then it simply won’t be used.’