What makes an ionic liquid viscous?

Experimental work from an international team of scientists has determined the relative contributions from two competing theories that seek to account for why an ionic liquid is viscous.

An ionic liquid is a salt with a melting point lower than 100°C. Ionic salts are more viscous than molecular liquids – a property that affords ionic liquids great potential in a range of applications, from battery electrolytes to gas separation, and as solvents for processing biomass. However, it’s not exactly clear why ionic liquids are viscous, limiting the ability of researchers to design ionic liquids for specific tasks.

‘There is a fundamental difference between a molecular liquid and an ionic liquid and that is the charge,’ explains Frederik Philippi of Imperial College London in the UK. ‘The charge has a number of effects on liquid properties – like charges repel and unlike charges attract. If you have a cation, it will preferably be surrounded by anions.’ This leads to a charge network, which is not necessarily the case for a molecular liquid that is more disordered. Opposite charges moving past one another and perturbing the network imposes restrictions on ion movement within an ionic liquid, which leads to an increase in viscosity.

However, another aspect is at play. Again, this arises from the presence of charge. The unlike charges within an ionic liquid are strongly attracted via Coulombic forces. ‘This leads to a higher density, because basically everything is pulled together. This is the coulomb compaction,’ says Philippi.

However, placing the analogue under high pressure created a demanding set of experimental criteria, including ensuring that the analogue’s constituents did not react or destroy the measuring equipment. With these experimental criteria in mind, the team identified triethyl(3-methoxypropyl)phosphonium butyrate as the ionic liquid and an equimolar mixture of triethyl(3-ethoxypropyl)silane and 1-nitropropane as the analogue. Their experimental viscosities at room temperature and ambient pressure were 217mPa s and 0.99mPa s, respectively. 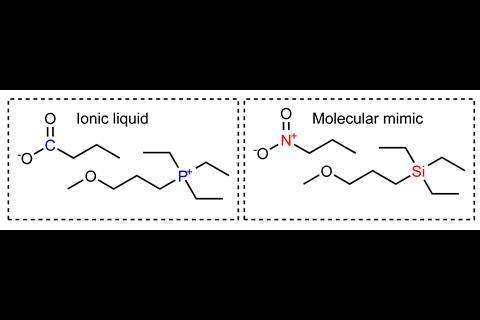 The ionic liquid/molecular mimic combination used in this work 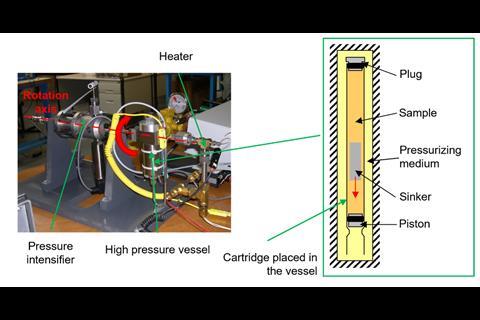 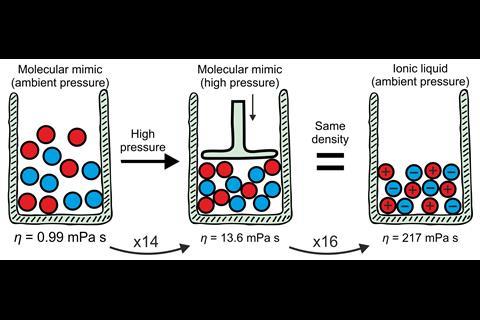 The first jump in viscosity, going from 0.99mPa s to 13.6mPa s arises due to increased density, which is the effect of coulombic compaction. For the molecular mimic to reach the same viscosity as the ionic liquid, a factor of 16 is required and this is due to the charge network

‘The researchers find that compaction and charge-network formation roughly equally contribute to the unusually high viscosity of ionic liquids, underscoring the importance of both theoretical concepts,’ comments Diddo Diddens, whose research at the Jülich Research Centre in Germany involves ionic liquids and electrolytes.

‘What we were totally surprised about, pleasantly in the end, was that it almost 50-50,’ says Welton. ‘Historically there have been two sets of theories as to why ionic liquids are so viscous, and actually, what we showed was, they are both right.’

Diddens also notes that the findings could hint at an underlying theory for the viscosity of ionic liquids. ‘Compaction due to short range attraction and long-range ordering are grounded in the coulombic interactions and therefore have the same origin. It is therefore conceivable that even a framework unifying the two theoretical approaches could be developed in the future.’

‘If you want to design an ionic liquid, you have to think about both parts, coulombic compaction and the charge network,’ notes Philippi. Uncovering this duality has important ramifications for chemists, particularly those developing designer solvents. With the relative contributions to the viscosity known experimentally, theoreticians now have a benchmark upon which to test their simulations and computations as well as guidance on how to tune the behaviour of ionic liquids for experimental applications.