Researchers have shown how confining a chemical reaction to an extremely small space can alter its dynamics, using a thin layer of silica to trap hydrogen and oxygen gas next to a ruthenium catalyst.

Mauricio Prieto and colleagues of the Fritz Haber Institute of the Max Planck Society in Germany wanted to observe what happens to reactants in a confined space compared to an open system.

They attached oxygen atoms to a ruthenium surface and then covered the surface with a thin layer of silicon. They annealed the silicon at 1000K in an oxygen atmosphere to produce a thin film of silica weakly held above the oxygen-covered metal surface. They then flowed hydrogen gas through pores in the silica layer, and used low energy electron microscopy to visualise where hydrogen reacted with oxygen on the surface to form water. 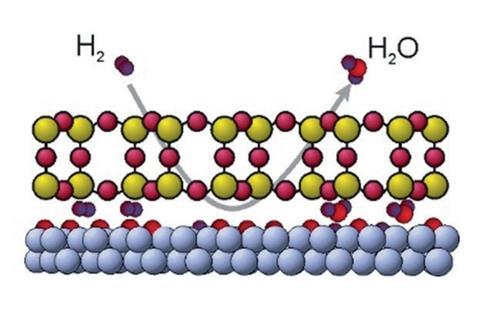 It’s not clear if confinement speeds the reaction by introducing new reaction pathways or making existing steps easier, says Thomas Schmidt, one of the researchers involved. He adds that the team are now planning to collaborate with theoretical chemists to simulate various steps of the reaction and learn more about how confinement could affect the mechanism.

Qiang Fu, who has studied confined reactions at the Chinese Academy of Sciences, thinks it’s ‘beautiful’ to see the reaction progress under the silica film, and says seeing a reaction that is otherwise hidden helps to better understand what is happening.