Researchers in Australia have found that a confined reaction environment created by copper atoms arranged into pyramid-like structures can selectively transform carbon dioxide and carbon monoxide into ethylene glycol.1 As well as identifying a new reaction mechanism for producing a valuable diol with varied industrial applications, the work highlights the potential of designing reaction environments to increase catalyst selectivity and efficiency. 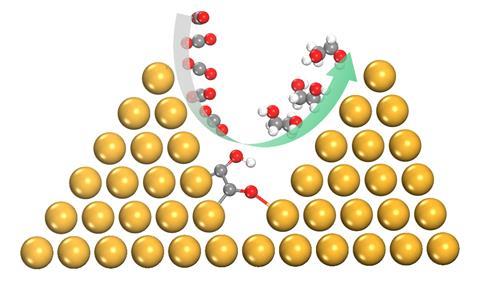 ‘Electrocatalytic conversion of carbon dioxide to chemicals and fuels has been viewed as a promising path for meeting the carbon-neutral goal advocated by the Paris Agreement,’ explains Ling Chen, from the University of Adelaide. ‘Its successful implementation, however, is contingent upon the development of high-selectivity and energy-efficient catalysts.’ Carbon dioxide can be converted electrochemically into single- and multi-carbon products. But producing alcohols is more challenging than forming hydrocarbons, and selectively producing higher-value C2 chemicals such as ethylene glycol remains elusive. ‘To the best of our knowledge, a complete route for electrosynthesis of diols from carbon monoxide and carbon dioxide has never been reported before either experimentally or theoretically,’ says Chen.

Previously, the researchers showed2 computationally that shaping the copper catalyst as a pyramid would increase electrocatalytic activity and selectivity for C2 products. This was attributed to improved adsorption, the presence of preferable sites for C–C coupling and enhanced electron transfer. Building on this work, the team used density functional theory calculations to demonstrate that the environment created by neighbouring copper nanopyramids enables selective conversion of carbon dioxide and carbon monoxide to ethylene glycol.

The Adelaide researchers also uncovered the reaction pathway that facilitates direct electrosynthesis of ethylene glycol. This pathway is not favourable on a planar copper surface or less densely packed nanopyramids. Closely arrayed copper nanopyramids allow the formation of an extra O–Cu bond between adsorbed COH–CO and copper on an adjacent pyramid. Such atomic arrangement not only promotes C–C coupling but also preserves oxygen atoms against dehydroxylation. The extra bond also enhances hydrogenation to ethylene glycol by lowering the formation barrier to key intermediate COH–CHO and kinetically suppresses the usual dominant pathways.

‘Reactivity in spatial confinement is essential to many biological processes in nature,’ comments Reshma Rao, of Imperial College London, UK, who researches electrochemical reactivity at interfaces. She says insight from this work ‘provides a framework for experimentalists to rationally exploit nanoconfinement effects and alter the local reaction environment to produce high-value products from carbon dioxide.’