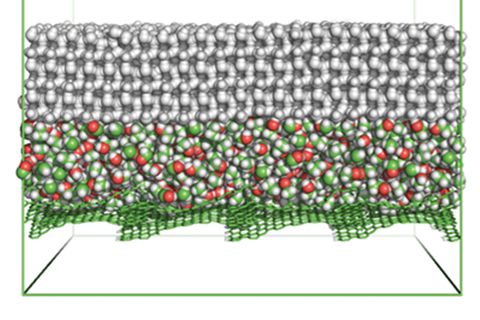 Scientists have made a polymer system that slowly releases ethanol to create a non-freezing lubricating layer at ice–material interfaces. The system can last for 593 days at extremely low temperatures without having to replenish the ethanol.

Unwanted ice formation is a common annoyance. Roads, electric cables and wind turbines are just a few examples where ice can be a nuisance or seriously affect safety. Traditional de-icing methods, however, require a high-energy input and even new de-icing methods using liquid layers struggle to replace the liquid-creating lubricant. Other systems include water-generating surfaces but these fail to function at very low temperatures due to water’s high freezing point.

In this research, exploiting the lower freezing point of ethanol (–114.1°C) allows surfaces to maintain icephobicity even at extremely low temperatures. ‘Most current icephobic materials are not targeted at extremely low temperatures,’ says Zhiliang Zhang from the Norwegian University of Science and Technology, who led the study. He envisages the icephobic surfaces supporting human activities in the Arctic Ocean and Antarctica. However, longevity is the biggest advance of this system as durability has been a major hurdle. ‘It’s amazing that even after 590 days ethanol can still be released,’ comments Doris Vollmer, who investigates the wetting behaviour of structured surfaces at the Max Planck Institute for Polymer Research, Germany.

The researchers chose a silicon polymer as the coating’s base material as ethanol diffuses in polymer matrices. Curing the silicon matrix–ethanol emulsion traps ethanol in the structure. If ice forms on the coating, ethanol diffuses out of the matrix. The ice absorbs the ethanol, which depresses its freezing point, melting the ice at the interface and resulting in a liquid interfacial layer. This interfacial layer reduces ice adhesion at the coating surface. ‘Essential to the success of these liquid layer generators is tailoring the ethanol release rate,’ says Zhang. Slowly releasing ethanol gives a controllable, renewable liquid interfacial layer.

‘People are generally moving away from liquid lubricating-type surfaces because they lose their lubricant so this is an interesting way of using a liquid layer and keeping longevity. In that case it’s a promising direction,’ says Kevin Golovin, an expert on surface science from the University of British Colombia, Canada.

Zhang says there is still a lot of optimisation to do on the liquid layer generators. ‘In principle, they can be applied to any exposed surface.’