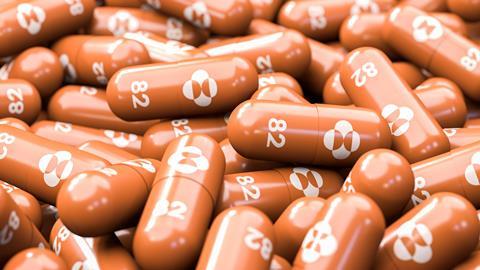 A second antiviral drug – developed by Pfizer – has shown promise at curtailing the severity of Covid-19 infections in preliminary clinical trial data. Meanwhile, the UK has granted regulatory approval to Merck & Co and Ridgeback’s Lagevrio (molnupiravir). These developments will be welcome as winter approaches the northern hemisphere – infection rates are rising across Europe, driven largely by reduced restrictions and resumption of indoor gatherings.

Pfizer’s PF-07321332 inhibits the viral main protease, which blocks the virus from replicating

Pfizer revealed interim results from a phase 2/3 trial, showing that Paxlovid (PF-07321332 with ritonavir) cut hospitalisation or death by 89% when given within three days of initial Covid-19 symptoms. Three out of 389 (0.8%) patients who received the drug were hospitalised, while 27 of 385 (7%) in the placebo group were hospitalised, and seven later died. The company intends to file with regulators for emergency authorisation. Pending approval, Pfizer expects to manufacture 180,000 courses of the medicine by the end of this year, and over 21 million in the first half of 2022.

Meanwhile, in November, the UK became the first country to grant regulatory approval for Merck & Co and Ridgeback’s Lagevrio (molnupiravir). In a similar trial, the drug reduced the risk of hospitalisation or death by around 50% in those with mild to moderate Covid-19.

Merck estimates – assuming it receives emergency authorisation in December – sales of $5–7 billion (£4–5 billion) by the end of 2022, including $0.5–1 billion in 2021. It has purchase agreements with Australia, South Korea, New Zealand, Serbia, Singapore, the UK and US. It agreed in October to forego royalties on sales of the drug in poorer countries during the pandemic, and is working to license the drug to several generics producers. Beximco Pharma of Bangladesh will be the first such company to launch its alternative version.

Antivirals are not a substitute for vaccines, but are complementary. ‘Antiviral treatments that can be taken at home to keep people with Covid-19 out of the hospital are critically needed,’ said Wendy Holman, chief executive of Ridgeback Biotherapeutics.

This is the main advantage of Paxlovid and Lagevrio over Gilead’s intravenously-administered Veklury (remdesivir), which was granted emergency authorisation in the US in October 2020. ‘Antivirals work better when given early on to limit replication of the virus, even before people experience symptoms,’ agrees Adolfo Garcia-Sastre, antiviral researcher at Icahn School of Medicine at Mount Sinai, New York. Later, if a person is hospitalised, it is usually an exaggerated immune response rather than viral replication that requires treatment.

However, viruses’ rapid mutation rates also mean resistance can emerge quite quickly. ‘We are going to need multiple combinations of antivirals [with different mechanisms of action] to make a bigger impact [on Covid-19],’ Garcia-Sastre predicts. While PF-07321332 binds directly to the main protease enzyme of Sars-CoV-2, blocking viral replication,1 molnupiravir is a nucleoside mimic that is incorporated into the replicating RNA strand, causing catastrophic mutations.

More oral antivirals are also in the pipeline. Roche and Atea Pharmaceuticals’ AT-527 blocks the polymerase enzyme required for viral replication, although an outpatient trial recently yielded disappointing results.