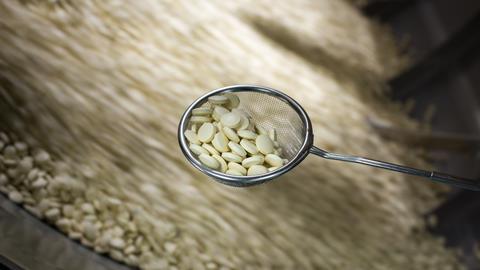 Resilience and redundancy are key amid protectionist calls for domestic manufacturing

Amid the panic-buying of toilet rolls, flour and dried pasta when lockdown hit the UK in March came concerns about medicine supply, with long queues forming outside pharmacies. Shelves were emptied of paracetamol products, fuelled by worries there would soon be none left. It put a sharp focus on the global nature of modern supply chains, and where things are actually made.

‘When the pandemic first started and people were having trouble getting [personal protective equipment], everyone was scrambling for how we going to make more,’ says John DiLoreto, executive director of US trade association the Bulk Drug Task Force. ‘We are a global economy, and many parts of what we manufacture and use come from all over the world.’

The pandemic created a perfect storm in the supply chain, according to Sam Roscoe from the business school at the University of Sussex, UK. ‘It became very difficult to access products, and there were airfreight capacity issues because airlines weren’t flying,’ he says. ‘But the pharma industry did relatively well in the UK, maintaining drugs on pharmacy shelves. Generics suffered more because of the run of demand.’ 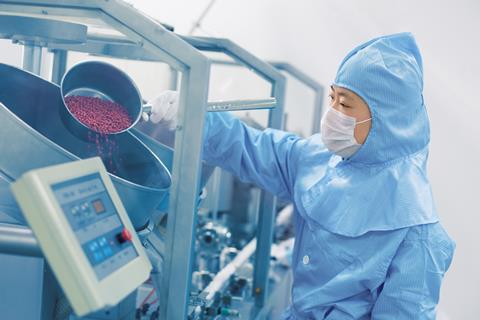 It helped that the pharmaceutical industry was already carrying a lot of inventory, particularly in the UK. ‘They usually have about six months of buffers, but in the UK drug companies were already building up stockpiles in anticipation of a no-deal Brexit. It was preparations for Brexit, not a pandemic, that saved them.’

The paracetamol problem was exacerbated when the Indian government imposed an export ban in March. ‘The UK government managed to get that overturned towards the end of April, but the initial knee-jerk reaction of the Indian government was to say we are making these products, and we want them for our own population first,’ Roscoe says.

UK drug companies were building up stockpiles in anticipation of a no-deal Brexit. It was preparations for Brexit, not a pandemic, that saved them

European trade organisation Cefic was already aware of the potential for a disaster to cause huge problems in the pharma supply chain. Its European Fine Chemicals Group published a position paper in January, citing disruptions that were already occurring, and proposing solutions.

‘Members alerted us about two years ago to problems sourcing from China because complete industrial parks were closing down after the government implemented a wide environmental plan,’ says Maggie Saykali, Cefic’s director for speciality chemicals.

And then the pandemic hit, first affecting China, where the bulk of the world’s active pharmaceutical ingredients (APIs) are manufactured, followed by the Indian export ban. ‘There were also problems sourcing intensive care medicines, partly because some member states started stockpiling,’ she says. While European companies stepped up, ramping up API production at short notice is not easy, particularly without a specific order for the product to guarantee the costs will be covered. Regulatory limits also have an impact.

‘Increasing output, increasing inventory and postponing maintenance, stepping in making other products, and having regulatory flexibility all prevented the storm from being as bad as it could have been,’ Saykali says. ‘But it was a real alert. Mitigating actions do not solve the root problem.’

The current model of long, lean, cost-efficient supply chains has a lot of issues. Roscoe gave evidence to the UK government’s international trade select committee in April, and recommended the development of a parallel supply chain. ‘The idea is to have an element of local drug manufacturing for critical drugs, maybe 20%, with the rest maintained overseas,’ he says. This would allow local production capacity to be ramped up at relatively short notice in a crisis.

It would take a fundamental change in thinking at pharmaceutical companies, he believes. ‘Are we really about saving money and keeping costs as low as possible, or are we trying to build resilience into our supply chain? At the moment it is so clustered in China and India it creates a lot of risk. If they don’t begin to spread this manufacturing footprint, these issues are going to keep happening.’

A recent survey of senior staff at pharma companies by analysts Globaldata looked at how the Covid-19 impact has changed in the third quarter of 2020 compared with the early days of the pandemic in the first quarter. ‘They said their single biggest business concern was employee safety, but that was followed closely by the impact on supply chains,’ says Fiona Barry, an editor at Globaldata PharmSource. While fewer companies said there was a major risk for APIs or finished doses compared to earlier in the year, APIs remain the biggest concern.

We do have a lot of European API manufacturers, but they rely on raw materials coming from Asia

It’s not unusual for a chemical manufacturer to want redundancy in the supply chain, with multiple sources of key ingredients. But that six months of product inventory held as a buffer leaves a lot of cash tied up in unsold goods. ‘Companies realise this is a problem, but tend to the side of caution and overstock to protect them from spikes in demand,’ Roscoe says.

Companies have increased their inventories for APIs, intermediates and finished products coming from certain key regions, Barry adds. ‘A good 20% of companies said they don’t plan to increase their inventories. North American companies are more likely to stockpile APIs than in Europe, Asia Pacific and China.’ They are also looking to diversify their supplier lists: a quarter of companies with small molecule drugs plan to spread their API manufacturing to more countries, she says.

However, Roscoe says, if they began to localise some production, it could offset inventory-carrying costs. ‘The unit cost of production might be higher, but the cost of holding inventory is much lower, as you can make it and ship it to customers within a couple of days instead of four or five months. The [stockpile buffer] would be perhaps six weeks instead of six months.’ Pharma companies’ initial reaction to the concept of ‘reshoring’ is negative, but they are more open to the idea of doing this for a proportion of their manufacturing. ‘You talk about risk and resilience, and then that conversation begins to make more sense,’ he says.

Bring it all back?

Both Saykali and DiLoreto are clear that there is a good deal of local API manufacture in Europe and the US already. ‘We do have a lot of European API manufacturers, but they rely on raw materials coming from Asia. That is the problem,’ Saykali says. Generics are more vulnerable, as most of the APIs come from China.

It’s a similar story in the US. ‘About 25% of the API manufacturing facilities within our membership are located in the US, the rest of them are around the globe,’ DiLoreto says. ‘Our manufacturers have come to the recognition that they need redundancy and the ability to manufacture in different parts of the world.’

Everyone is becoming very provincial about it, but that is not going to work – we are going to need to work together

However, in August, US president Donald Trump signed an executive order demanding that federal agencies prioritise domestic sources when purchasing essential medicines. Efforts to increase domestic manufacturing had already been made: Eastman Kodak tried to set up an API manufacturing project (which failed because of accusations of insider trading), and companies such as Phlow are look at using continuous manufacturing to make APIs in the US.

‘We started probing into the supply chain issue, and found it was a mess,’ says Frank Gupton, chief executive of Virginia Commonwealth University’s Medicines for All Institute and one of Phlow’s co-founders. ‘Hundreds of drugs were in short supply, even before Covid-19.’ 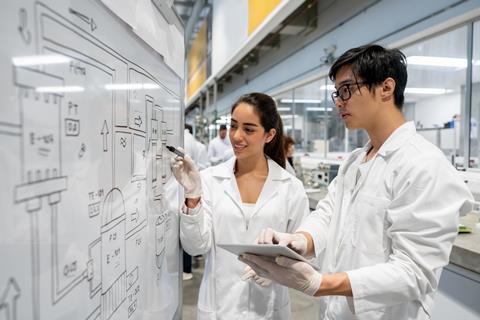 Having worked on continuous manufacturing earlier in his career, he thought this could provide a solution for reshoring manufacture. Labour-intensive batch processes were shifted to countries like India and China where labour costs were lower, but continuous manufacturing is more automated and less labour-intensive, and also affords an opportunity to reduce waste. However, it requires process re-engineering. ‘In the very short term we may use batch manufacturing to fill that gap, but in the long term we have to be cost-competitive,’ he says.

Phlow’s efforts were accelerated after Covid-19 hit, and in May it was awarded a $354 million (£273 million) contract by the Biomedical Advanced R&D Authority (Barda) to make important medicines for Covid-19 treatment that were in short supply.

The US is not alone in its desire to reshore manufacturing operations. DiLoreto has found similar issues talking to colleagues in Europe and China. ‘Everyone is becoming very provincial about it, but that is not going to work – we are going to need to work together,’ he said. ‘If we don’t have good relationships with our colleagues in other parts of the world, our supply chains are going to fail.’

And even if there is a concerted effort to reshore manufacturing, it cannot be done overnight. ‘Anything we are doing now is going to take years to implement,’ Barry says. ‘A new pharmaceutical manufacturing facility has to be validated, and the regulators have to approve it. It takes years to get them up and running.’

But, says Saykali, manufacturing processes should not be brought back in their current form, as technology offshored 20 years ago is outdated, particularly by environmental standards. ‘We propose to invest, upgrade and take the opportunity to innovate,’ she says. ‘We need a global quality standard, not simply the cheapest option. Being more self-reliant takes a cocktail of measures – investment, regulatory flexibility and trade.’

The investment would be significant, and Roscoe believes that, for critical drugs at least, there needs to be government support to make it part of the national response to Covid-19. Healthcare providers like the NHS look to keep costs as low as possible but, he says, there will have to be an acceptance that locally produced drugs will be more expensive.

Shortages are already occurring because of the economics of production, DiLoreto believes. ‘When drugs get to that point where the profit margin is so low they are not worth making, companies no longer manufacture them and you can see how it can easily become a shortage situation,’ he says.

While the contracts with the likes of Kodak and Phlow have made headlines, he says, we should be taking advantage of existing manufacturing capacity, both in the US and around the world. ‘We really don’t need to reinvent the wheel. If we already have a manufacturing facility but it cannot manufacture a specific API because additional equipment is needed, it still has a head start as the Good Manufacturing Practice programme is in place. Adding to that operation is an incremental step we can take fairly quickly. We don’t need to build a brand new facility, as there is a lot of unused capacity.’

And, says Saykali, there are some things we will not be able to reshore in their current form because of the economics and the processes used. ‘I think we have had our wake-up call as a society,’ she says. ‘It is an opportunity for innovation.’