NASA’s latest Mars probe is set to land this weekend, but the question remains of whether it is able to detect the signatures of life

On 6 August, if all goes to plan, NASA’s Curiosity probe will touch down on a rocky crater close to the Martian equator. Its main mission objective is to look for signs of habitability – evidence that there is, or has been at some point in the past, conditions favourable to life. Yet amid the anxiety over the forthcoming landing, some scientists are wondering: if there are signs of habitability, will Curiosity be able to detect them? 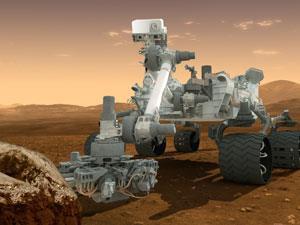 The search for life on Mars has a long history, dating at least back to 1976, when NASA’s Viking landers explored the Red Planet. Those landers mixed into the Martian soil a radioactive nutrient solution and subsequently detected the emission of radioactive gas – a result that suggested the presence of microbial activity. Confusingly, however, another experiment on the landers found no evidence of organic compounds – and, by extension, no microbes.

The contradiction led many scientists to reason that the first result must have been taken in error. But it wasn’t that simple: even if there was no life on Mars, the planet should have been teeming with organic compounds – an estimated 240 tonnes bombard the surface every year aboard meteorites. One answer to the riddle is that the Martian surface contains metal oxides that have photocatalytic properties; as ultraviolet lights strikes these particles, they generate species that react and destroy the organics. A more recent hypothesis is that, during the high-temperature Viking analyses, the organics were accidentally oxidized by chlorites and hypochlorites – products of the decomposition of perchlorate (ClO4–) exposed to ionizing radiation. The presence of this salt ion on the Martian surface was confirmed after NASA’s Phoenix lander explored the planet in 2008.

The perchlorate idea has had some experimental support. In 2010, Rafael Navarro-González at the National Autonomous University of Mexico in Mexico City added a little perchlorate to soil taken from the Atacama Desert in South America. Having heated their sample to 350°C – a similar temperature to that used in the Viking analyses – the researchers discovered that the organics present were destroyed by oxidation. Moreover, the destruction led to a release of chlorinated methane, which was detected by the Viking landers. ‘The best explanation [was] that the Martian soil contains a few parts-per-million of organics,’ explains group member Christopher McKay of the NASA Ames Research Center in Moffett Field, US.

Not everyone agrees with this conclusion. Jeffrey Bada of the University of California, San Diego, US, believes that if Navarro-González and others are right, then the Viking landers ought to have detected both chloromethane and dichloromethane; in fact, each lander detected just one of the two compounds. On the other hand, he says, the detected compounds could have been produced by reactions involving the landers’ cleaning solvents. ‘This is the most logical explanation,’ he says.

Even so, the perchlorate idea is persuasive – and if it is responsible for destroying the organics present in Martian soil, the Curiosity probe could suffer the same problem. Like the Viking landers, Curiosity will search for organics (in part) by heating samples, which means it is similarly susceptible to perchlorate, explains Samuel Kounaves at Tufts University in Medford, US. ‘My hunch would be that, based on the data we have so far and experiments we have performed, there will be no organics – and certainly no life – found on the surface of Mars,’ he says – although he adds that that doesn’t mean the organics don’t exist.

Kounaves and his colleague Shannon Stroble have come up with a new analysis device that doesn’t need to heat samples, and so wouldn’t suffer the perchlorate problem. In their device, a Martian soil sample is added to an electrolyte, and then subjected to a voltage between two diamond electrodes. The voltage oxidizes any organics present to produce carbon dioxide, which is then measured; the amount of carbon dioxide is proportional to the amount of organics. In short, the device exploits oxidation to get around the very problem of oxidation.

It would have been too late for the Curiosity scientists to change their instruments when the presence of perchlorate on Mars was confirmed some twelve years ago – although future missions could potentially make use of Kounaves and Stroble’s device. Nonetheless, Pamela Conrad at NASA’s Goddard Space Flight Center in Greenbelt, US, says she wouldn’t have changed the suite of instruments, even if the potential for perchlorate-led oxidation had been known. Conrad is the deputy principle-investigator of the Sample Analysis at Mars (SAM) instrument suite, which will make up more than half of Curiosity’s scientific payload. The SAM suite includes a mass spectrometer, gas chromatograph, and tunable laser spectrometer, and together these instruments should enable scientists to figure out whether perchlorate has in fact been destroying organics.

As one example, says Conrad, Curiosity will be the first rover that is able to compare samples taken from the surface and samples drilled from deep inside rocks. Since rocks shield compounds from ionizing radiation, they should be home to less perchlorate-led oxidation.

Even allowing for oxidation, Eli Shkrob at Argonne National Laboratory is confident some organics will be found. But the bigger question, he says, is whether they are biological in origin – and this could be nearly impossible to answer. ‘Our entire intuitions are analogical: we are looking for familiar signatures,’ he adds. ‘But Martian life would be adapted to Martian conditions; its biosignatures could be cryptic to us.’

‘I do not think [the probe] will provide the answers,’ he continues. ‘But it will help to formulate better, more informed questions. That’s what science is all about. It is not called Curiosity for nothing.’