UK researchers have thrown important new light on the phenomenon of hydrogen tunnelling in biological catalysts. The work suggests that tunnelling, believed to be central to the function of many enzymes, is driven by subtle changes of conformation confined to the active site - and that longer-range dynamic changes of the protein apparently play no part in the process. 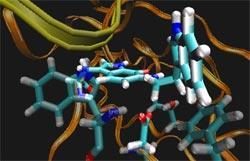 Now researchers from the universities of Bristol and Manchester have combined experiments and computer simulation to analyse the reaction in a bacterial enzyme, aromatic amine dehydrogenase, in which tunnelling is the dominant mechanism by which a proton is removed from the enzyme’s substrate, tryptamine.

The researchers used x-ray crystallography to determine the enzyme structure during the reaction, and combined this with kinetics, molecular dynamics simulations and quantum mechanical modelling to find how the reaction happens.

’The modelling demonstrates that in this enzyme reaction tunnelling is very important and that, crucially, the tunnelling is promoted only by short-range molecular motion at the active site,’ Adrian Mulholland of Bristol University told Chemistry World. ’Long-range flexing of the rest of the protein molecule plays no direct role in the process.’

The finding is likely to spark a keen debate among biochemists about the fundamental nature of enzymes, and the role of conformational changes in the bulk protein molecule say scientists.