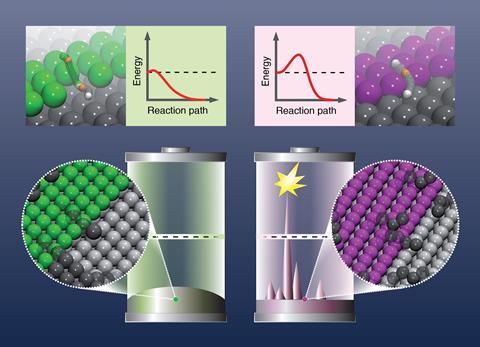 Scientists from Germany have proposed an element-specific theory for why battery electrode materials differ in their propensity for growing dendrites. The findings could help extinguish battery safety issues that arise when these finger-like growths cause short circuits.

From mobile phones igniting mid-flight to electric cars spontaneously bursting into flames, dendrites that grow in batteries have a lot to answer for. Whilst previous studies have focused on how to reduce dendrite growth, Axel Groß and colleagues from the Helmholtz Institute Ulm and Ulm University in Germany are instead seeking battery materials that don’t form dendrites in the first place.

The team noticed that while lithium, zinc, and sodium batteries commonly form these spark-inducing growths, magnesium and aluminium batteries are almost dendrite free. Therefore, to better understand dendrite formation, they looked for a correlation between the self-diffusion barriers of different metals. These barriers are the interfaces that reduce diffusion of an atom on a surface made of the same element and dictate how likely it is that metal atoms will deposit on electrodes and cause dendrite growth.

By investigating the different metals, Groß and co-workers found that lithium ions have relatively high self-diffusion barriers and mean that once the lithium ions diffuse down a gradient onto a surface they stay there and form a rough patch. The dendrite then branches from this defect. They say this indicates that dendrite formation is an inherent property of this element. In comparison, metals like magnesium have a very low self-diffusion barrier and form smooth surfaces, and dendrites are therefore far less likely to occur.

‘I must admit I was surprised that apparently hardly anybody has taken an element-specific approach to studying dendrite growth in batteries,’ says Groß. One of the issues with models in previous studies, he says, is that they are often quite generic, ‘for example, [they] have only taken the metallic nature of the electrodes in general into account, but were hardly specific with respect to the particular metallic element.’

Energy storage expert Partha Mukherjee from Purdue University, US, says that this study establishes self-diffusion barriers as a unique descriptor of the likelihood of an array of anodes to form dendrites and ‘positions itself as an ideal screening tool for potential dendrite-free metal anode selection’.