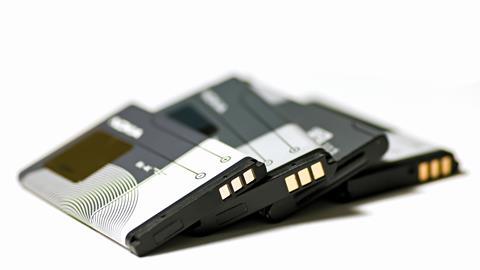 Short bursts of current can flatten spiny growths on a battery’s lithium metal anode. This method of self-healing dendrites, which can cause a battery to catch fire, could be used to make more powerful batteries viable, the researchers say.

Researchers started experimenting with lithium metal anodes in the 1970s to increase the energy density of rechargable batteries. An electrode with a thin layer of lithium can store more energy-carrying atoms than one made from porous materials like graphite. But they soon found that lithium anodes can catch fire.

When a lithium–ion battery charges, lithium ions travel from the cathode to the anode; the ions flow the other way during discharge. At a lithium metal anode, lithium ions leave and return to the surface unevenly. This means that after several charging cycles, spiny projections called dendrites begin to grow from the electrode’s surface. As these lithium dendrites grow, they can pierce the membrane separator in the middle of the battery, touch the cathode and short circuit the cell. This can starts fires.

Scientists manage dendrite growth by coating the anode with materials that partially block, redirect or contain them. Now, Nikhil Koratkar at Rensselaer Polytechnic Institute in the US and colleagues have developed a way to flatten dendrites before they start causing problems. 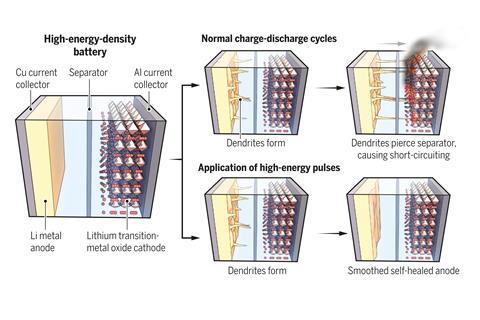 The researchers charged a coin cell with a lithium foil anode and cathode for 50 cycles at current densities ranging from 0.75mA/cm2 to 15mA/cm2. Then they removed the anode from each cell and examined its surface using scanning electron microscopy. As expected, dendrites formed on the electrode at lower current densities, which reflected low rates of charging and discharging. The particles got larger as the current density increased.

‘Even though we saw that the dendrites were getting worse, we went to higher charge/discharge rates,’ Koratkar says. ‘At a certain point, we found a new regime of dendrite growth, where things started to get better.’ At current densities greater than 9mA/cm2, the dendrites began to merge and the electrode surface was smoothed out.

Heat transfer simulations revealed that a current density of about 15 mA/cm2 increased the temperature around the dendrites about 40–60°C. This elevated temperature is high enough to allow lithium atoms at the dendrite tips to diffuse to the electrode surface, but not high enough to damage other components in the battery.

Managing dendrites with bursts of high current is counterintuitive to the idea that higher current densities increase dendrite formation, says Amartya Mukhopadhyay at the Indian Institute of Technology Bombay. Since dendrite formation cannot be prevented, flattening them with periodic pulses of current is a fantastic way to manage them because it does not allow them to grow too long and it does not require extra materials inside a cell, he says. While the researchers tested this approach in a lithium–sulfur cell, in principle, it could be used with any battery chemistry that uses a lithium metal anode, he says.