Scientists from China and Australia have designed a water-resistant perovskite solar cell that can operate in a humid environment and maintain its efficiency over three weeks. 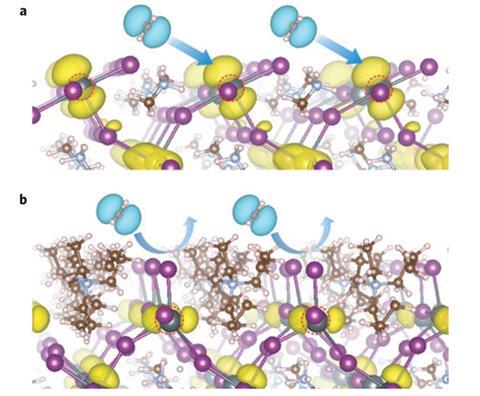 Although the efficiency of perovskites has increased dramatically in the last five years, jumping from an efficiency of 14% to 20% in just two years, commercialisation still remains out of reach. Some groups claim the current crop of cells can only be tested in an inert atmosphere. To date, the efficiency of one perovskite cell has been accredited by a national test laboratory at a modest 15%.

‘There are still many open issues concerning [perovskite’s] true potential for widespread practical applications such as the device stability, toxicity of lead perovskite absorbers and hysteresis effects,’ explains Hui Jun Zhao from the Centre for Clean Environment and Energy at Griffith University, Australia.

Such cells typically have a methylammonium lead iodide (CH3NH3PbI3) structure, which previous groups have attempted to modify or change completely in order to improve its stability. But Zhao and his colleagues have adopted a different approach.

Recognising that water molecules are absorbed by lead in the perovskite’s surface layer, the team decided to replace a portion of the surface cations with hydrophobic tetra-alkyl ammonium ions. ‘We invented a dipping technique capable of functionalising perovskite films prepared by any reported methods in a simple and effective manner,’ says Zhao.

The group dipped a perovskite film into an alkyl ammonium iodide isopropanol solution for 20 seconds, allowing the alkyl ammonium cations to functionalise the surface. The film was then rinsed with an isopropanol solution and dried. This modified surface prevents moisture from penetrating the film and reacting with lead cations to form degradation products, such as PbI2, according to the researchers.

Stored in the dark for 21 days at 55% relative humidity, the modified perovskite is capable of retaining up to 90.4% of its original power conversion efficiency. The group claim the film can protect the cell at 90% relative humidity over 30 days before degrading.

Michael Grätzel from the Swiss Federal Institute of Technology in Lausanne believes the research will be of benefit to the community. ‘It’s a nice study and interesting results from a surface chemistry point of view,’ he tells Chemistry World. ‘With these tetra-alkyl ammonium ions, the moisture effect is strongly attenuated – that’s all good news.’

But he warns questions will still remain over its long-term stability in the field. ‘In the end, the cells have to be stable outdoors for many years and that is what is missing,’ comments Grätzel. ‘We need more information, [such as] how the cells would behave under long term light soaking in full sunlight.’