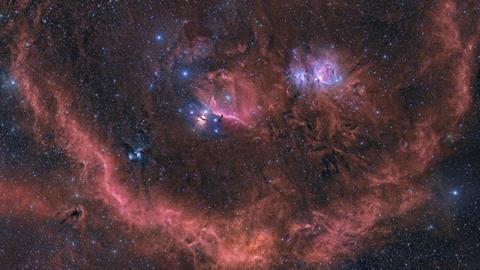 Discovery of aromatic molecules in interstellar cloud shakes up astrochemistry

A team of scientists in the US has detected polycyclic aromatic hydrocarbons (PAHs) in a cold, dark interstellar cloud for the first time. The discovery challenges scientific consensus that PAHs only form in the hot atmospheres of dying stars.

The group, spearheaded by Massachusetts Institute of Technology chemist Brett McGuire, used the Green Bank Telescope in West Virginia to identify two PAHs in the Taurus Molecular Cloud (TMC), which is a large cloud of dust and gas roughly 450 light years from Earth. McGuire and colleagues detected benzonitrile in TMC back in 2018 and have been searching for molecules there ever since. Now they have also observed signatures of two PAHs – 1-cyanonaphthalene and 2-cyanonaphthalene. These molecules consist of two fused benzene rings with a nitrile group attached to one ring.

PAHs account for a significant proportion of all carbon in the universe. But until now, they were found only near dying stars where they form at high temperatures. This is the first time that they have been uncovered in cold, dark clouds where stars haven’t even begun to form.

Since the temperature in the TMC is only about 10 degrees above absolute zero, it suggests that PAHs aren’t simply the byproducts of dying stars and may instead be assembled from smaller molecules. When these molecules grow large enough to aggregate into the seeds of interstellar dust, they can affect the composition of asteroids, comets, planets and more, McGuire noted.

‘We’ve gone from one-dimensional carbon chemistry… to real organic chemistry in space in the sense that the newly discovered molecules are ones that a chemist knows and recognises, and can produce on Earth,’ team member Michael McCarthy from the Harvard-Smithsonian Center for Astrophysics told MIT News. ‘Whether these organic molecules were synthesised there or transported there, they exist, and that knowledge alone is a fundamental advance in the field,’ he adds.

The researchers plan to continue examining the TMC with the Green Bank Telescope. They also want to investigate how the PAHs they found were formed, and what kinds of reactions they may undergo in space.