Nanorobots made out of DNA or other biological material can already perform complex tasks like transporting and sorting different molecules. However, most are individualists, working as single units.

Inspired by the movie Big hero 6, in which a student invents microrobots that work together to make giant structures, a team around Akinori Kuzuya from Kansai University and Akira Kakugo from Hokkaido University has designed biomolecular motors that form tightly packed swarms that can form lines or circles. The nanorobots’ behaviour can be switched from solitary to swarming and back with either a chemical or a light signal.

The robots are modified microtubules, hollow protein cylinders around 25nm in diameter and between 2 and 10μm long. As they can’t move themselves, Kuzuya, Kakugo and co-workers enlisted the help of kinesin, a motor protein that moves along microtubules when fed with adenosine triphosphate. A layer of kinesin immobilised on a surface gives the nanorobots a means of propulsion.

Each microtubule is equipped with one of two types of single-stranded ‘receptor’ DNA pieces. To switch on swarming, the researchers add another piece of single-stranded DNA that crosslinks the receptor strands. Two microtubules randomly gliding past each other thus stick together when the complementary receptor and association DNA strands pair up. A second receptor on one of the microtubules can then capture another association strand, increasing the size of the flock.

After around one hour, the five million microtubules on the surface will have formed swarms consisting of hundreds of units each that continue to move across the surface. Flexible microtubules form circular swarms, strikingly visible as glowing rings under the microscope due to their fluorescent tags. To dissolve the swarms, the team simply adds a third strand of DNA that is fully complementary to the association strand, thus removing what holds the swarms together. 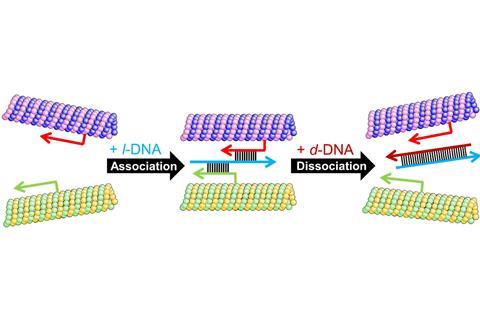 Addition of a specific association sequences of DNA causes the microtubules to assemble into a swarm. A dissociation DNA strand causes the swarm the to fall apart

Looking for a way to replace this chemical switch, the team found that they could incorporate a light-switching azobenzene unit into the receptor strands. Microtubules tagged with complementary receptor strands associate and eventually form swarms as long as the azobenzene is its trans isomer. Under UV light, ‘azobenzene turns into its cis form, it destabilises the DNA duplex, which will dehybridise’, explains Kakugo. Once the UV light is switched off, azobenzene returns to its trans form.

‘I think this is a really important breakthrough to not only switch on crosslinking between microtubules but also be able to turn it off again,’ says Jennifer Ross, an expert in microtubule biophysics at the University of Massachusetts Amherst, US. As the nanorobots are modified biologicals, they are likely to be biocompatible but unlikely to survive for longer than a few days. A non-biological system, Ross suggests, for example based on carbon nanotubes and artificial enzymatic propulsion, might be more robust.

Nonetheless, the tiny robots have great things ahead of them. ‘We’re thinking about adaptive actuators or analyte concentrators,’ says Kakugo. ‘One thing we’re already doing is to develop a kind of artificial muscle – a macroscopic system that shows some kind of movement,’ adds Kuzuya.