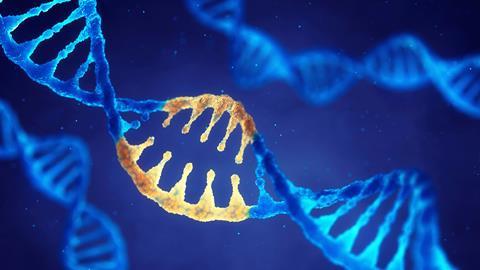 Chemists have used one-pot click chemistry to join multiple fragments of DNA together into a functioning gene. The approach could be a more efficient and cost-effective way to synthesise genes and genomes, particularly those containing epigenetic modifications.

Gene synthesis is an important tool for the life sciences and is a key part of the second generation of the Human Genome Project, HGP-write, which aims to build genomes from scratch. But synthesising long DNA sequences accurately and in reasonable yield is difficult. Automated synthesis can only reliably produce strands of DNA about 50 to 100 bases long. That means researchers must join many such pieces of DNA to synthesise a gene with hundreds of bases, or a genome containing thousands to millions of bases. 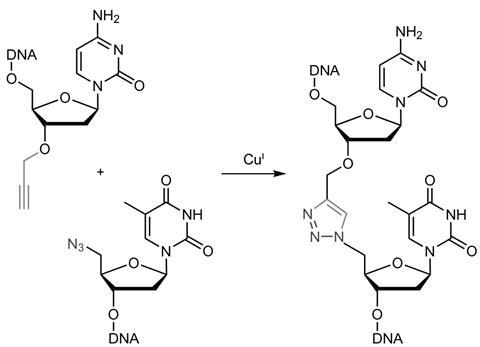 Current methods of gene and genome syntheses achieve this use enzymatic approaches such as PCR (polymerase chain reaction). However, these techniques can be time consuming and because polymerase doesn’t distinguish between modified and unmodified versions of a base, site-specific epigenetic modifications such as methylations cannot be carried over from the template strand into the templated strands.

In 2011, a team led by Tom Brown, then at the University of Southampton, and Ali Tavassoli, also at the University of Southampton, used click chemistry – an azide–alkyne reaction that creates a triazole link – to join DNA strands and showed that bacteria could express information encoded in a triazole-linked DNA plasmid.1 Now the researchers have explored whether cells will tolerate longer genes, with more triazole linkages.

They synthesised 10 complementary fragments of DNA each flanked with a 3’-azide and a 5’-alkyne. The fragments then self assembled to form the genetic instructions for the green fluorescent protein iLOV. Adding a copper catalyst ‘clicked’ the fragments together. The result was a 335-base pair gene with four triazole junctions in each strand.

The gene was inserted into Escherichia coli bacteria, which glowed green under a fluorescent microscope, indicating that their cellular machinery could read the gene and produce the iLOV protein.

Once the complementary strands have assembled, adding a copper catalyst initiates the click reactions that join the strands together

The team also used the method to synthesise a version of the iLOV gene with methylated cytosines at four specific locations in the sequence. By enabling genes with site-specific epigenetic modifications, the work has potential in genome synthesis and synthetic biology, Tavassoli says. The click-linked synthesis does not require enzymes so it could be automated easily, potentially reducing the time and cost currently associated with genome synthesis, he adds.

Rajesh Viswanathan, a chemical biologist at Case Western Reserve University, is impressed that cells can process the synthetic gene. Beyond introducing epigenetic modifications, he imagines that the uncharged triazole could make it easier to insert an artificial gene into a cell by reducing the negative charge of DNA’s phosphodiester backbone that usually prevents it from crossing cell membranes.