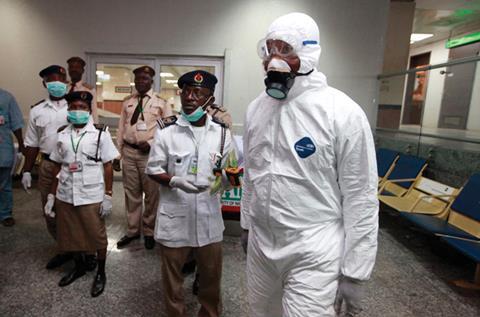 Kent Brantly, a US doctor who was helping treat Ebola patients in Liberia, is slowly recovering from the Ebola virus at the isolation unit at Emory University Hospital in Atlanta. Brantly has been receiving the experimental drug ZMapp – which until now had never been tested in humans.

No licensed treatment or vaccine is available for patients suffering from Ebola. But the World Health Organization (WHO) has advised that the use of experimental drugs is ‘ethically acceptable’ under the exceptional circumstances of the latest outbreak in West Africa. The large number of people affected and the high fatality rate justify using investigational medical interventions, it says.

‘Giving unlicensed and untested – at least in humans – treatments and vaccines is a very thorny ethical issue,’ remarks Jonathan Ball, professor of molecular virology at the University of Nottingham, UK. ‘The infected US healthcare workers are receiving a type of treatment – antibodies that specifically target the virus – that has a reasonably long safety track record, so it isn’t surprising given the high fatality rate in the current outbreak that they are happy to receive the therapy.’

The emergency use of an experimental medicine is highly unusual, but the WHO has declared the Ebola outbreak a public health emergency of international concern. The epidemic began in Guinea in February and has since spread to Liberia, Sierra Leone and Nigeria. On 19 August, the WHO put the death toll at 1229 with 2240 cases reported. Medical charity Médecins Sans Frontières says the outbreak will not be under control for at least six months.

In opening the door for experimental treatments, the WHO stresses the lack of solid scientific data from clinical trials and the possibility of adverse side-effects. It raises another issue, too, about whether such treatments could be administered in west Africa where the necessary intensive care facilities are rare.

Brantly’s treatment with ZMapp was arranged by his employer, Samaritan’s Purse, the private humanitarian organisation, through the National Institutes of Health (NIH), which flew him to the US. Another American, Nancy Writebol, a missionary with SIM who also contracted Ebola in Liberia, is being treated at the same isolation unit. Miguel Pajares, a Catholic priest working in Liberia, was treated with ZMapp in a Madrid hospital, but became the first European to die of the virus. Three doctors in Liberia are also being treated with the drug.

The US manufacturer of ZMapp, Mapp Biopharmaceutical, says it complied with every request for the drug that had the necessary authorisation, including one from the Liberian government. But it has now exhausted supplies. The company had only produced sufficient doses for animal testing. It says ‘the present epidemic has changed the picture dramatically’, and it is working with the US government to accelerate production.

Mapp only determined the current antibody combination in January after efficacy studies in monkeys conducted by the Public Health Agency of Canada. In a further development, the Canadian government has said it will donate several hundred doses of an experimental vaccine developed in a government lab to the WHO for use in Africa. The vaccine, licensed for commercialisation to US firm BioProtection Systems, has proven effective in animals but has never been tested in humans.

Some argue that the current outbreak provides a perfect arena in which to test new drugs, Ball says, but there are risks. Another issue is who should receive the drugs? ‘Restricting treatment only to healthcare workers and volunteers could be seen as unethical,’ Ball says, ‘but treating the larger number of local infected people isn’t easy; the supply isn’t large enough and trying untested treatments that may or may not work and may or may not be safe might reverse all the efforts made building trust and goodwill.’

Doctors often use drugs on a compassionate basis to treat medical conditions for which the drugs have not been evaluated, says Tom Solomon, director of the Institute of Infection and Global Health at the University of Liverpool, UK. However, the differences here are that some of these new treatments have not been evaluated at all, and the first test in humans is in a patient with the disease. ‘What is key is that if these new experimental drugs are going to be used, then this should only be done in the context of a clinical trial,’ he says. ‘Otherwise, the worry is that we will have tried these drugs, including putting people through the potential risk of experimental treatments, and still be none the wiser about which are effective.’

Jeremy Farrar, director of the Wellcome Trust, believes it is essential that rigorous protocols for the study of experimental interventions are developed quickly so African countries have the same opportunities as western countries, and ensuring equitable access to any that prove effective. ‘We must also remember that while we can likely provide safety data from anywhere in the world, we can only assess whether a vaccine or drug works for Ebola by using it in affected countries with the consent of individuals and communities concerned.’

Biocryst Pharmaceuticals and Temira both have antiviral drugs in early development; Biocryst expects to begin Phase I testing later this year

Crucell and Profectus Biosciences are developing an Ebola vaccine.