Dorset geology gives clues to past life on Mars 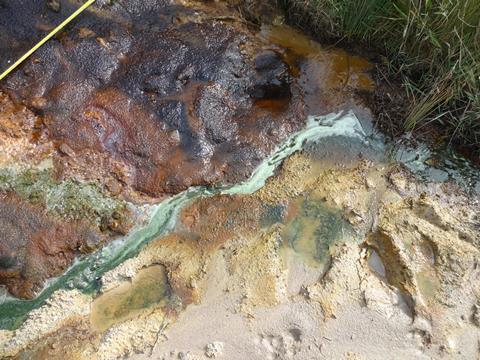 Acidic sulfur streams in Dorset may provide a glimpse into what Mars was like 3.7 billion years ago

If you want to find life on Mars, start in Dorset on the UK’s south coast, researchers recommend. Since the local acidic sulfur streams mimic conditions on the red planet around 3.7 billion years ago, fatty acid remains of microorganisms living in these streams could help future Mars missions look for traces of past life.

While today Mars’ low atmospheric pressure doesn’t allow liquid water to exist, several billion years ago the red planet’s surface was more wet and Earth-like. During that time, it might have supported life, most probably in the form of extremophilic microbes. However, no evidence of life – past or present – has been found.

Mark Sephton and his team from Imperial College London, UK, have looked at acidic streams in Dorset as a model for early Mars. Although at pH 3.5 the ferric sulfate stream at St Oswald’s Bay is as acidic as grapefruit juice, it contains algae and bacteria. When they die, they become embedded in the streams’ iron sulfate and iron oxyhydroxide sediments. Here, they leave tell-tale signs of life: long-chain fatty acids that can be detected by gas chromatography-mass spectrometry. Since the same minerals occur on Mars, finding similar carbon chains could provide evidence of life.

Assuming that Mars’ microbe density was once similar to that of present-day terrestrial sulfate streams, up to 15 megatonnes might still exist on the red planet, the team estimates. However, how much of this amount remains is unclear since lipids can be degraded into alkanes or broken up into smaller compounds by ionising radiation.