Researchers have engineered a nested catalyst that combines the best of both metal oxide and zeolite catalysts, turning carbon monoxide and hydrogen directly into liquid hydrocarbons. Its unique layered structure maximises performance and selectivity for liquid hydrocarbons, particularly the traditional ingredients of petrol. 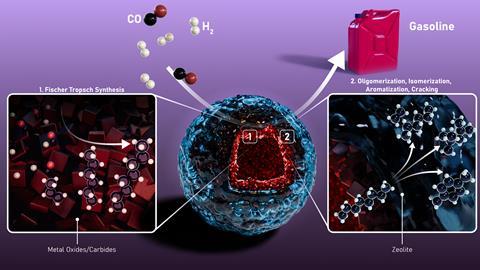 ‘Tandem catalysts with metal oxides and zeolites already existed,’ explains lead author Bert Weckhuysen from Utrecht University in the Netherlands. However, their structure and architecture are often random – a result of the processes used in their fabrication. ‘Our controlled synthesis yields double-shelled hollow spheres with great possibilities.’ Among other things, the layered arrangement facilitates the different stages of the step-by-step conversion of syngas into fuels.

The Fischer–Tropsch process converts syngas – a mixture of carbon monoxide and hydrogen – into hydrocarbons, often paraffin and other waxy substances. Further reactions convert them into liquid fuels, such as petrol.

The new double-shelled spherical catalyst can carry out both steps at the same time. ‘First, the inner metal oxide layer turns CO and hydrogen into linear hydrocarbons, then the zeolite layer handles oligomerisation, isomerisation and cracking,’ Weckhuysen explains. ‘Our hollow particles combine these functions very well, with a very high selectivity towards branched hydrocarbons and aromatics,’ he says. ‘This is most desirable in gasoline, since linear molecules promote unwanted engine knocking.’ 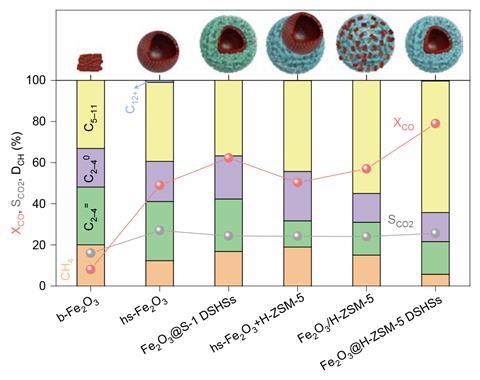 Carbon monoxide conversion with a range of catalysts including a standard industry iron oxide one. The final tandem catalyst (far right) had the best profile when it came to producing more complex hydrocarbons

The preparation of these bifunctional spheres is extremely simple – the key is microscopic carbon particles. These carbon structures have metallic ions inside them, which will then become the inner catalytic layer in the final product. On top of them, researchers deposit seed zeolite nanocrystals, then calcinate the whole thing. ‘This step kills two birds with one stone,’ says Weckhuysen. ‘Calcination oxidises the metal into its active form, and burns the carbon scaffold completely,’ he adds. A final procedure further grows the zeolite into different thicknesses, depending on the products desired.

‘This approach is exceptionally clean,’ says Jorge Gascón, an expert in heterogenous catalysis based at King Abdullah University of Science and Technology in Saudi Arabia. ‘It’s surprising nobody else had tried … using carbon spheres as templates,’ he says, adding that ‘it’s synthetically very elegant’. The double-hollow spheres solve a common problem in this type of tandem catalysts – the migration of metal ions into the zeolite, which may decrease its acidity and performance, explains Gascón. ‘It looks like the metal cations are stable within the carbon matrix and do not exchange with the zeolite … something surprising and highly encouraging,’ he says. ‘I am sure further experiments will provide more insights on the growth mechanism.’

Tunability is another advantage of these double-shelled spheres. Although applicability remains unexplored, Weckhuysen and co-workers have already prepared different variations of their catalysts with cobalt, copper, manganese and nickel. ‘We also vary the thickness of both layers, the metal oxide and the zeolite, offering many synthetic possibilities,’ he says. Gascón wonders about the possibilities too. ‘For example, multimetallic shells with cobalt–indium or copper–zinc could yield methanol directly from carbon dioxide and hydrogen, instead of syngas.’