Chemists in Germany have discovered a conceptually new and simple way to synthesise sulfonamides using electrochemistry. This new process avoids harsh conditions and allows chemists to directly functionalise aromatic moieties, without any prior treatment or modification. Moreover, the reaction could be scaled up for continuous systems, accelerating its industrial uptake. 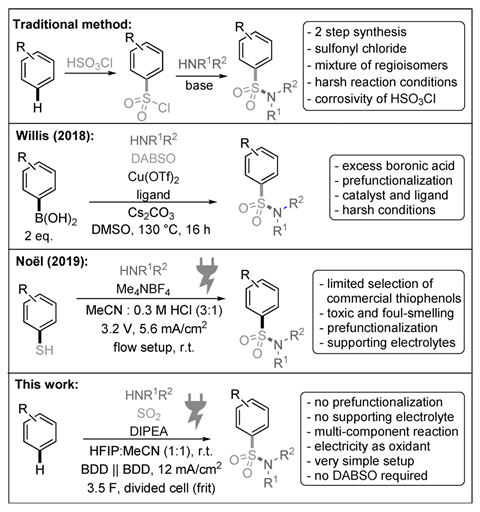 The sulfonamide functional group is ubiquitous in drugs, agrochemicals and dyes, but preparing aromatic ones required corrosive products like chlorosulfuric acid or high temperature couplings and expensive metal catalysts. Although some electrochemical approaches simplified the process, they still needed aromatic thiols as starting materials. ‘Starting from thiophenols seems unwise in terms of atom economy,’ explains Siegfried Waldvogel from Johannes Gutenberg University in Mainz, Germany, who led the study. ‘It means you need to functionalise your aromatic moiety first, adding unnecessary steps and making the process more expensive.’ Thiophenols are also air sensitive and only a few are commercially available. ‘And, of course, they are really stinky!’ notes Waldvogel.

This new methodology is a one-step, metal-free alternative where electricity is the only oxidant. Once in solution, the amine reacts with sulfur dioxide to form an intermediate known as amidosulfinate. Now, both oxygen and sulfur can attack the aromatic ring, previously oxidised to a radical cation thanks to the electric current. ‘We have picked our solvents very carefully to control this reaction,’ says Waldvogel. ‘We used hexafluoroisopropanol, which forms strong hydrogen bonds with the oxygen atoms, blocking their attack and leading to the formation of the carbon–sulfur bonds,’ he adds.

‘This tandem process involves the formation of the amidosulfinate, arylation and oxidation using a simple electrochemical setup,’ says Phil Baran, a synthetic organic chemist at Scripps Research, US. ‘The ability to access sulfonamides directly … will likely encourage process chemists to prioritise [these] routes,’ he adds.

Waldvogel co-authored the paper with collaborators at Merck’s Process Research and Development laboratories in New Jersey, US. ‘They are very interested in this type of methodologies,’ he explains.

Since the discovery of prontosil, one of the first synthetic antibiotics, sulfonamides have become a key functional group in drug discovery. ‘Sulfonamides are structural analogous of amides, but more stable,’ says Waldvogel. ‘Unlike amides, our enzymes cannot hydrolyse sulfonamides, which makes them very attractive for the pharmaceutical industry.’

Furthermore, this method is ‘greener and safer’ than traditional alternatives and could provide ‘a way to repurpose sulfur dioxide’, according to electrochemistry expert Shelley Minteer from the University of Utah, US. Burning fossil fuels produces the pollutant sulfur dioxide, which power stations scrub from flue gases using chemical processes. It often gets captured by reactions with basic salts, such as lime, to form sulfites, used by winemakers as preservatives. ‘But demand is usually low – our method provides a new opportunity to recycle this waste product,’ adds Waldvogel.

The team has demonstrated that their concept is scalable, making several products at gram scales. ‘The strategy developed could be easily scaled up to large size, flow-based electrolysis systems,’ says Minteer. ‘Waldvogel’s group has the expertise to do it.’

Eliminating expensive chemical oxidants or pre-functionalised starting materials lowers the overall cost towards these ever-present molecules, argues Baran. ‘It is a great step forward for sustainable synthesis,’ he concludes.