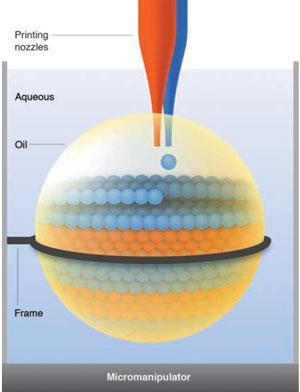 Back in 2007, Hagan Bayley’s lab at the University of Oxford, UK, created bionetworks made from small droplets all linked together.1 Each of the aqueous droplets were individually pipetted into an oily phase, where they linked together to create a chain of droplets with a lipid bilayer at each interface. Into those bilayers Bayley’s postdoc at the time, Matt Holden, introduced the alpha-haemolysin (a-HL) protein that the group do a lot of their work on, and showed that the linked droplets could conduct a current. But making and linking these droplets together was fiddly work, requiring someone to individually pipette each droplet and then move it into place.

Fast forward five years and the Bayley lab aren’t fiddling about by hand anymore. They’ve got a robotic printer to assemble their networks and that means the networks they’re printing aren’t the small two-dimensional arrangements they started with.2 Instead they can arrange hundreds and thousands of these small droplets to create complex three-dimensional networks than can even fold up into more complicated geometries.

‘Hagan’s group have taken it way beyond what even I could have imagined,’ says David Needham, currently a visiting professor at the University of Southern Denmark in Odense, Denmark. Needham was one of the first scientists to create two aqueous droplets that interfaced in oil, and prompted Bayley to start working in this area.

DPhil student Gabriel Villar designed and built the machine, which prints small droplets into pre-determined arrangements. The device has two nozzles: one prints droplets, linked by protein pores, which make up the network, while the other prints the ‘support’ droplets that hold the droplet network in place. ‘This isn’t a simple as ink jet printing,’ explains Villar. For a start, because the oil is so viscous the movement of the nozzles through the oil can drag the droplets with it, so that had to be factored into the program.

The resulting soft networks can be further encapsulated to create a water-in-oil-in-water system – the water droplet assembly is held together in a larger oil droplet that is then surrounded with water. This started Bayley thinking, he says, about drug delivery applications or even perhaps using the networks, which have a similar elasticity to soft biological tissues, as supports for failing organs in the body.

Needham describes the work as ‘really innovative’ but is a little cautious of some of Bayley’s claims saying that ‘this doesn’t have to have an application, it stands on its own’. However, he adds that he is most impressed that these larger networks can conduct electricity. Bayley describes these networks as ‘minimal tissues’ with each droplet acting like a synthetic cell. For Needham, the conductive pathways make the term minimal tissue most apt – ‘that’s a nerve channel’, he says.

One of the most immediate applications, Bayley says, might be tissue engineering. Especially as the droplet networks can create systems with electrical or concentration gradients to direct growth. The soft systems have even been made to fold into shapes that can’t be printed by using the power of osmosis to change the relative sizes of the droplets, allowing them to fold up. The folding also suggests that the system might one day be used to create motors or actuators, even soft robotics. Alex Graham in the Bayley lab is already working on making this folding reversible, although Bayley admits this is proving difficult.

Villar says that the most satisfying part of the work was being able to simplify and automate what was previously a ‘pretty laborious’ process. ‘Something like 3D printing, which has exploded in popularity, has many more applications than anybody can think of at first,’ he adds.

But if it was creating a new technology that Villar found fun, he says that having a long term vision of the potential applications was essential, ‘otherwise you can get very depressed if you just think you’re playing with solutions of salt and lipids’. Time will tell where those salty solutions and lipids will end up.