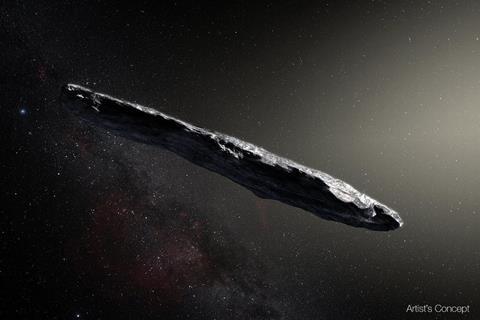 A coat of frozen carbon-rich compounds might be the reason ʻOumuamua – the strangely disk-shaped object first spotted near the sun in October – never developed a tail like other comets.

ʻOumuamua is the first interstellar object, a body that is not gravitationally bound to a star, to visit the solar system. When it was discovered, astronomers were uncertain how to classify it. Unlike a comet, it hadn’t developed the typical tail of vaporised gases and dust as it was heated by the sun. Researchers were puzzled and declared ʻOumuamua to be the first in a new class of astronomical objects.

However, the interstellar object might be a comet after all. A team around Alan Fitzsimmons from the University of Belfast, UK, might have found the answer to ʻOumuamua’s missing tail: an insulating layer of carbon-rich ice.

The coat, estimated to be about half a metre thick, stops the water-ice-containing interior from vaporising when exposed to the sun’s heat. Fitzsimmon’s team came to this conclusion after analysing the object’s visible and near infrared reflectance spectra and comparing them with other carbon-rich surfaces in the outer solar system.

Although scientists are still working on getting a clearer picture of what exactly ʻOumuamua is made of, the study suggests that it might be long-term exposure to high-energy cosmic rays that formed the organic ice coat that made the comet lose its tail.