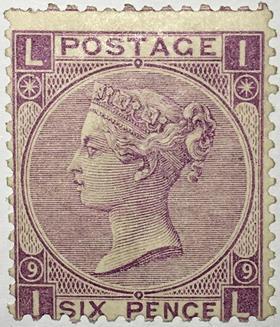 William Perkin’s aniline mauve, the dye he first made by accident from coal-tar extracts in 1856, transformed the chemical industry of the Victorian age and set Perkin himself on a path to become one of the most celebrated chemists of his age. Even so, we may have underestimated him.

According to analyses of Perkin’s ‘mauveine’ dyes in Victorian stamps and textiles, performed by organic chemist John Plater of the University of Aberdeen, UK, Perkin may have had greater control over the chemistry of the manufacturing process than has previously been recognised. ‘Far from the accidental chemist, he really was a true pioneer of his time,’ says Plater.

Perkin’s mauve dye, made from aniline that was in turn produced from the benzene in coal tar, is a complicated substance. The colorant was dubbed mauveine, but there are in fact several distinct chromophore molecules in the dyes that Perkin, and later other competitors, produced in the factory-based manufacturing process. In particular, the aniline they used contained isomers of toluidine, which also contributed to the product.

As a result, the exact mixture of different forms of mauveine in surviving samples of the dye can act as a fingerprint of its provenance and method of synthesis, showing where and how it was made. The different mixtures also give slightly different shades, and Perkin himself spoke of a ‘red shade’ – which was considered more attractive – and a ‘blue shade’.

So Plater has had to conduct careful detective work to tease out the compositions of mauve dyes from different sources. Samples of the bottled dye, allegedly from 1856, and mauveine-dyed fabrics are kept in several museums, including London’s Science Museum, the Manchester Museum of Science and Industry and the Chandler Museum of Columbia University in New York.

However, a more easily accessed source is Victorian stamps: Perkin’s mauve was used for the lilac-coloured six-penny stamps throughout the latter half of the 19th century, of which many still exist. Plater has used liquid chromatography–mass spectrometry to identify the forms of mauveine in several of these stamps, as well as from a sample of the dye in the Manchester museum.

And here’s the curious thing: while all of these mauves, traceable to the manufacturing plant Perkin set up with his father and brother, have a similar composition, they are different from the mauveine that results from the method Perkin actually patented in 1856.

He concludes that this was deliberate. The method in the patent gives a mixture of four types of mauveine chromophore, but the stamps and museum samples have only two key ones, and has the more desirable ‘red shade’. By reconstructing the chemistry, Plater thinks the latter dye was deliberately made by incorporating a chemically modified form of toluidine in the mixture. This, he says, improves the yield and simplifies the mix of products. It seems that Perkin knew this, but never revealed it. 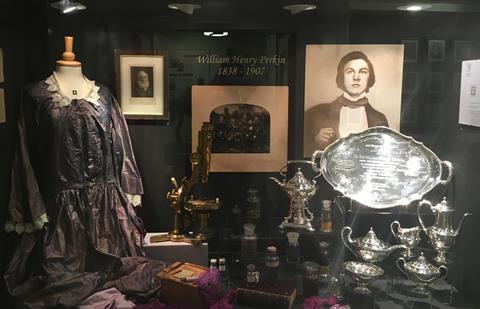 ‘I think he saw this reaction as a major leap in the production process and he wanted it kept secret to stop the French and Germans taking it over,’ says Plater. ‘It seems to me that he never fully revealed what he did to scale-up the production of his famous dye.’ That competition was ever present, and in fact Plater identified one stamp with a mixture of mauveines characteristic of the dye made not by Perkin but by Heinrich Caro at the Ludwigshafen-based dye company BASF.

‘Mauveine is a wonderful detective story,’ says Henry Rzepa of Imperial College London in the UK, who has collaborated with Plater on the synthesis and analysis of mauveines. ‘Perkin’s public descriptions of its manufacture held only part of the truth. John has deepened the story by combining both syntheses in the lab and analysis of original samples.’

‘Perkin was probably the first to realise that R&D would be needed to out-compete rivals in the fine chemicals industry,’ Rzepa adds. ‘Ironically, the German synthetic organic chemistry industry invested far more heavily in it than Perkin had the resources to do.’